State of Disrepair, more like. Big hole in the ground where you come out from the Green Line trolley.

All in a good cause, of course, the new Aztec Student Union. Greener building, they say. In a year or so it'll be done and look beautiful.

But you’d never know it now.

I cough my way through the dust to the bridge over College Avenue. Maybe they have places still open there.

Because one way or ’t’other, gotta have breakfast or I’ll implode. Been up since seven. Four hours ago. Hollow inside. I’m like a walking Carlsbad cavern.

So I’m heading up College when I see a bunch of white umbrellas in the sky. 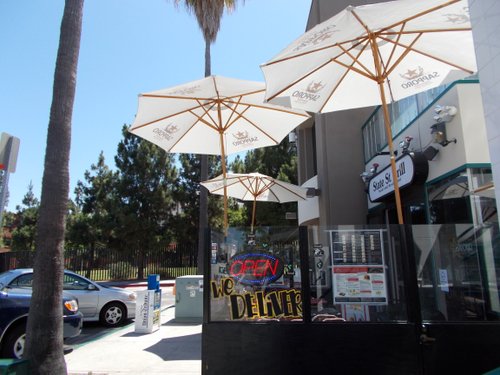 Three of them. That rings a bell.

Except here I see it says “Breakfast, lunch, dinner.”

Inside, it’s just the waiter, Jeff, and one other guy with a band on his head getting sushi ready, and me in here.

Feels like everybody’s just waking up, getting their kit together. Like I usually am this time of day.

I sit at a nice solid mahogany-looking table, surrounded by chalk blackboards and windows. The Eagles are singing “You can check out any time, but you can never leave.”

And yes! They are still doing breakfast.

Long story short, I go for one of their omelets. Jeff recommends the State Street Omelette Platter, with bacon, sausage, ham, mushroom, bell pepper, onion, and cheddar cheese. It costs $8.95.

“So how do starving students afford these?” I have to ask Jeff, who’s gonna be studying kinesiology (athletic training) here at State next year himself.

He points out how happy hour sweet potato fries are $3 instead of $6, shrimp tempura $4 instead of $8, and vegetable egg rolls cost $3.50 instead of $7. Drink deals too. 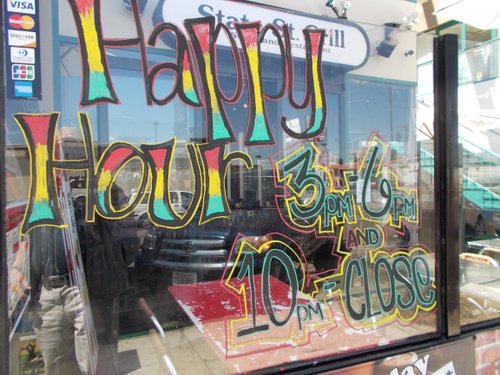 Whatever, I go for the State Street Omelette platter. 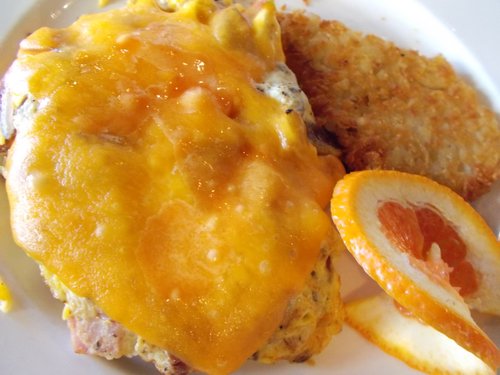 It's turns out to be a major slab of eggs and all those good things, specially the ’shrooms, onions, and the bacon-sausage-ham extravaganza inside. Plus a major lava flow of cheddar over the top.

A hash brown patty and thick sourdough toast make this a pretty good deal. I’d asked for a glass of milk ($2.99) but they didn’t have it. So they gave me OJ for the same price (and it’s usually $3.49). And that turns out great as a kinda flavorful grease-cutter. 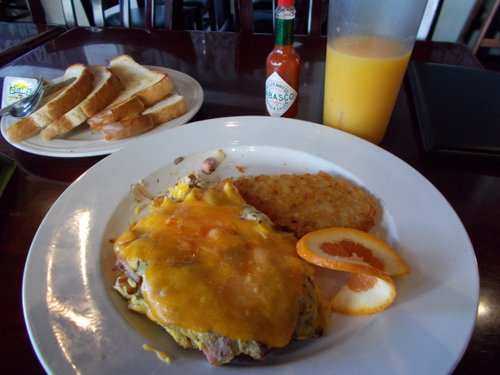 I come out into the sunshine totally revived. Yes, it’s probably a little more than I’d have paid at one of their on-campus feeding stations, but this is going to see me through the whole day.

What I still have a hankering for: to come back with Carla and a few buddies around midnight when for sure, this place is rockin’.