From the moment it went in, I had to wonder—what were they thinking? There was no denying it was a one-of-a-kind concept: a bar/restaurant outfitted to look like a log cabin. But what gave the owners the impression that San Diegans and Gaslamp-touring visitors were crying out for a log-and copper-plated homage to Abraham Lincoln?

I cannot tell a lie. I thought Lincoln Room was doomed from the start. This, despite the fact the menu of nostalgic American dishes was always decent to good, and available at prices low for anywhere, but especially downtown. It was just too out-there. Even Disneyland can’t make a hit out of the Lincoln motif, and they have audio-animatronics, a way larger budget, and more business trying to breathe life into such a concept.

So, just over year after revamping the space on the corner of Fourth Avenue and E Street that housed the equally unsuccessful (also despite having good food, though at pricier rates) Confidential, the Lincoln Room space is bracing for another rebirth, this time as The Commons Bar (901 Fourth Avenue).

The new biz will keep the existing configuration of the 2,800 square foot room, taking down the log cabin elements and replacing them with a more modern interior contrasted by retro touches. Among those are a large drive-in theater sign that will run the length off the formerly penny-encrusted bar (which will now be topped with a layer of cork, as will the tabletops). A game room will also be installed featuring shuffleboard, board games and tables emblazoned with checker and backgammon patterns. 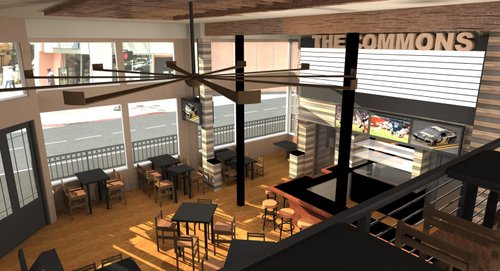 The goal is to help set an easygoing mood in the new space. Owners Jake Pescatello and Leigh Gibson (the latter is the founder of Pacific Beach’s notorious hot wing emporium Dirty Birds) are aiming for comfort behind the motto: life is tough enough, your local watering hole shouldn’t be. 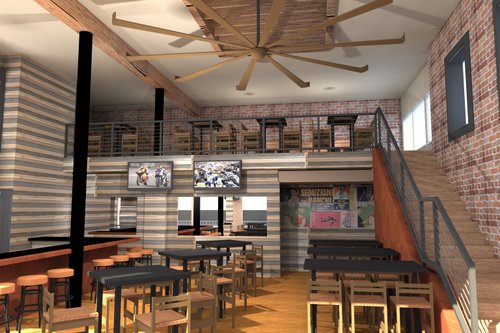 The food will be simple—hearty portions of American bar fare made with good ingredients (of course, there will be wings—both fried and grilled varieties). On the drinks side, they’ll lead with classic cocktails and quality craft beer. When The Commons opens in the fall, it will serve lunch, dinner, and late night eats, and roll out a daily happy hour as well as a “Kegs and Eggs” weekend brunch.