The first time I met Mary Beth Abate was at The Reader offices. We shook hands and, as one would expect, started talking about food and writing. We hadn’t gotten more than a hundred words into our exchange before she mentioned “the Wet ‘N Reckless kerfuffle.”

A lot of people bring up the negative post I wrote about the Mira Mesa nanobrewery back in March, or more specifically, the barrage of comments that showed up below my prose from customers who enjoy Wet ‘N Reckless’ brews. Owner Dave Hyndman and his faithful took to the website and were vocal in their belief I’d gotten it all wrong, pelting me with tons of derogatory comments.

The big question from most who saw this and talked with me about it later was, “will you stop doing your brewery tour reviews?” My answer: No...why would I? It’s no different than going to a restaurant and giving people an idea of what they can expect, good or bad.

I’m a huge proponent for the San Diego craft beer industry. That said, I refuse to allow my love for my hometown’s thriving suds scene to keep me from blindly yelling "hooray" for every operation within it. Like any industry, there are standouts and sad sacks. I’d love to tell you that every brewery is worth a visit, but that simply isn’t true.

It’s no fun for me to write negative reviews of any business—most of all breweries. But this isn't about fun. With over 50 to choose from currently, consumers should have some resource for selecting the companies that suit their tastes, fit the mood they’re in, and register high enough on the quality scale to offer them a passable experience. I’m not talking fantastic—I’m talking good enough to deserve your hard-earned money.

Part of the aforementioned “kerfuffle” (hell of a term, isn’t it?) was the misconception that Wet ‘N Reckless was unfairly singled out. To the contrary, I went in hoping the multiple negative rumors I’d heard about them were false. Unfortunately, they were confirmed. I merely wrote about that business as I did the four others I toured in doing research for my five-part series.

It was exactly like the five-part brewery tour that preceded it back in February where I wrote a negative review of Vista’s Prohibition Brewing Company. There were problems there. The beer exhibited numerous technical flaws and simply wasn’t up to snuff. It was also similar to the time I posted a consumer-beware piece about On-The-Tracks Brewery in Carlsbad for the poor quality of their beer.

But here’s the thing. These businesses are very young. Few brewing companies start out making beers that will go down as the best in their history. Plus, with any business, even those that come across as excellent, there’s always room for improvement. To take my review of Wet ‘N Reckless, Prohibition or On-The-Tracks as me saying they will always be subpar would be foolish.

What would also be foolish is for me to write them off. That would be irresponsible. While I may never be able to show my face at Wet ‘N Reckless again, my calendar is marked to go back to places I give negative reviews to, and earlier this month, I ventured back out to Carlsbad to visit the On-The-Tracks tasting room (5674 El Camino Real, Suite G).

The experience started off on a pretty note. Just beyond the front door was a sushi station. First time I’ve ever seen sustenance of that nature available at a brewery. I was doubly stoked when my touring companions and I took a seat in the small room beyond the tasting bar that serves as the combination brewhouse and overflow area for patrons, and saw a pair of guys prepared to grill up one-dollar tacos.

We sat down with our tasting flights which, when combined, included all of the seven beers on tap that day, arranged from lightest to darkest on pretty cool looking trays designed to mimic railroad tracks. The first beer we sampled was a golden-colored ale infused with tons of ginger. So much that it could have been labeled overbearing as it canceled out the classic yeast and hop flavors of the beer style, but that was easy to overlook because, with its slightly sweet spice, it was pretty tasty. 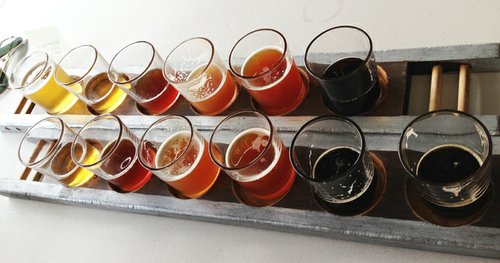 On-The-Tracks is all about darker beers, so to like this lighter ale bode well. I was encouraged. That feeling lasted about one-and-a-half minutes; the exact amount of time it took to get to the second beer, a sour that, while not awful, wasn’t very refined. Still, it was drinkable for the most part—at least in a small taster portion.

I was clinging to a few thin remaining strands of hope that were clipped by the seventies-style orange plastic-coated scissors that were beer number three—an amber ale that was almost as sour as the one that preceded it, but unintentionally so. This same fault has been evident in several ambers I’ve had from start-up breweries over the past year.

Other lackluster to undrinkable beers followed, including their Pullman Porter, which is one of their core beers and decent, but very thin in body and too low in carbonation; and a beer labeled a Burton ale that none of the industry insiders who were in my party were able to identify. 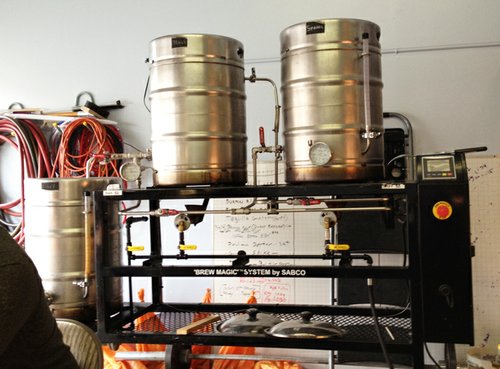 The big offenders of the day were a sweet and sour stout that was mostly sour and so out of balance I’d be hard pressed to think of anybody this would appeal to. Then there was the epitome of disgustingness—Smokey the Bitter. Smoked beers can be exquisite when crafted correctly, but this tasted like the run-off from an ashtray rinsed out with day-old lager.

Being thirsty for beer (this was our first stop of the day) but unwilling to subject myself to Smokey reminded me of an attractive woman I used to date who smoked. I never have, so kissing her was something I really wanted to do, until I realized doing so was like wrapping my mouth around the supple end of an exhaust pipe. I couldn’t reconcile that, and I most certainly couldn’t get past the immense errors so prevalent in this beer.

So, nearly a year since my initial review, I can report that On-The-Tracks has improved. There’s no longer beer that tastes as if it might be infected, so that’s good. Unfortunately, it’s still below average and probably won’t pass muster with many craft beer fans.