Part of the reason Brian Malarkey is so beloved by some and so abhorred by others is his showmanship. The guy is always on. Always ready for his close-up. Always hungry to grab the spotlight. To be fair, unlike so many hijacking media time these days, at least he gives people a reason to listen to him. He’s doing big things.

When he gets on the Twitter megaphone, there’s always the potential for big things. Granted, he may just as easily ask followers to hit up brunch at Burlap or tout his latest appearance way out of our market. That said, he just might announce he’s opening a new restaurant…or three. That’s what he did last November.

It fell right in line with his showman personae. Check it out. I’m not opening one restaurant. Two, that’s child’s play. How’s three restaurants grab you?

He reeled their names out like spools of the fabric the venues were named after—Gingham, Gabardine, Herringbone. The sheer volume of information made it hard for many (the media included) to keep these places straight. Was Gabardine the place with all the meat or was it Gingham? Did Herringbone have the former Top Chef contestant as the exec toque or was that Gabardine. Was the one in La Jolla called Houndstooth?

Nope, the one in La Jolla was Herringbone (7837 Herschel Avenue), and was set to be the last of the trio to open under the direction of former Top Chef standout Amanda Baumgarten. She and Malarkey got to talking about the future of fine dining while at the Western Food Expo in 2011, and later exchanged phone numbers. Malarkey called the very next day and brought up the topic of his new spots and needs for quality chefs to run them. 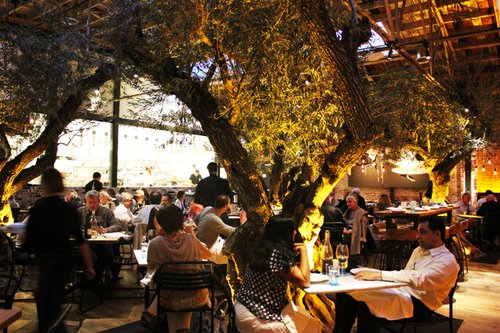 Many months later, Baumgarten is in charge of the exposed kitchen at the back of Herringbone’s spacious brick-, tree-, and blowfish-adorned dining room. The place has all the Thomas Schoos (God’s gift to San Diego restaurateurs stunted for novel light fixture ideas) reclaimed-contempo eye candy one would expect from an EHG eatery. It also has the most fine dining-attuned menu of Malarkey’s resto collection.

When tasking Baumgarten with developing the menu for Herringbone, the boss man told her some basic dishes he wanted on the menu—plates like grits, and bacon and eggs, which are common to all EHG restaurant menus—but allowed her to have her way with them, and granted her the freedom to come up with the remainder of the restaurant’s edible offerings. Having tasted a number of them, she’s done a really nice job—arguably better than any other EHG chef straight out of the gate.

A big part of this is keeping things simple and balanced. No dish features an overwhelming laundry list of ingredients, which is key in cuisine today; particularly in San Diego where recent trends have trained palates to crave simplicity, and pureness of flavor.

Plus, this chef just plain knows how to cook fish. She has that kitchen pumping out meaty portions of Alaskan halibut sporting golden brown, nicely seasoned crusts that bring big flavor to the mix. Why is this so noteworthy? Because so many restaurants, in San Diego and beyond, put out soggy pieces of fish that are overdone in the middle yet somehow fail to achieve optimal exterior browning. It’s almost sad that my list of plusses at Herringbone has to start with something so basic, but so many miss the mark in this area. The fact that she kicks ass at it is worth mentioning. 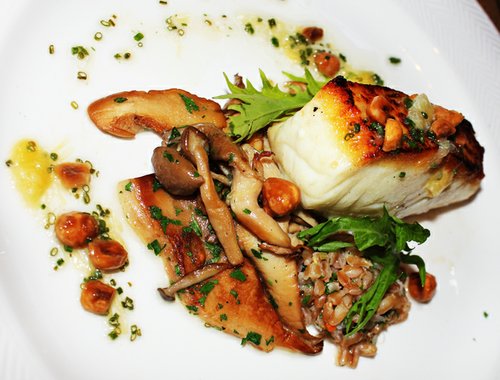 The halibut tastes of Meyer lemon and is served atop a mound of faro with oyster mushrooms and hazelnuts. The nuts add texture, but could probably be left off given the nuttiness of the faro. A dish that benefits from the addition of nuts—large pieces of walnuts in this case—is Baumgarten’s sturgeon over a carrot and brown butter puree with kale. It has a bit of a Thanksgiving flavor profile to it, which is enjoyable even in the summer. 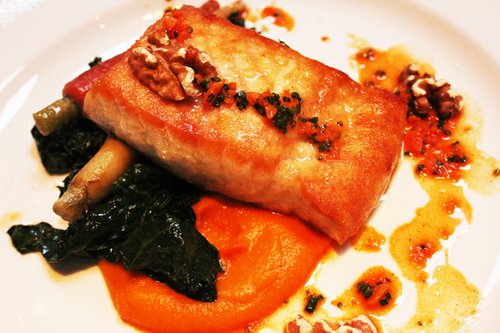 Baumgarten gets her sturgeon via a special connection forged with the Quileute Nation of Indians in La Push, Washington. She also picks up her hook-and-line-caught halibut and numerous other oceanic proteins from the Alaska Airlines cargo terminal at Lindbergh Field in the early morning hours. It hits her fridge within 36 hours of being caught. The quality of these items translates to the plate.

This brings me to another of her talents—knowing when to doctor things and when to leave them be. As exhibited by the fish dishes above, she can put good, well-cooked combinations on a plate, but she can also dress down plates to showcase the very essence of key ingredients.

A half-dozen different varieties of oysters, including Dabob Bay, Kumamoto, and Bogaduce, are on the menu. Rather than mess with them, she simply serves them with traditional accompaniments and a tomatillo-based sauce on the side. Half the fun of the dish is tasting the bivalves naked to appreciate their nuances. A mignonette or topping of bacon batons would kill that. 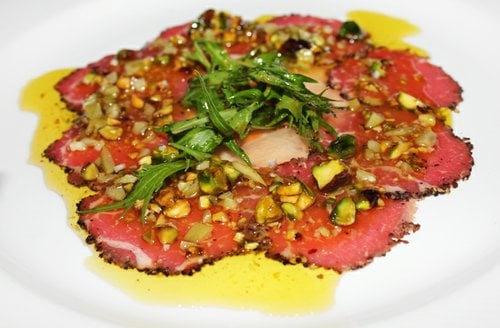 Hamachi gets a touch of chili and a bit of lardo added on for a signature, but mostly non-intrusive touch. An uncooked surf and turf of filet mignon and tuna gets a good glug or two of extra virgin olive oil and a bit of olive and pistachio for good measure, but it’s all about the proteins. 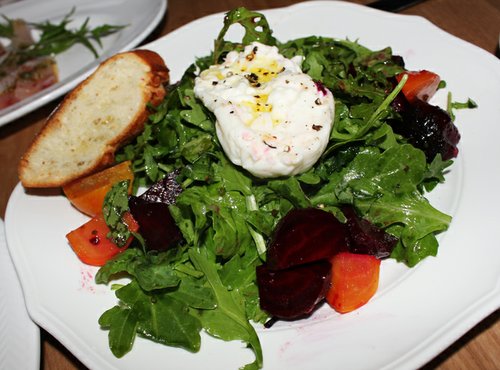 Pizzas presented as “Crusts” on the menu are generously topped. I enjoyed a pie topped with pancetta, fontina cheese, stinging nettle (a bit of a rarity that was cool to see) and an egg that, sadly, had an overdone yolk that wouldn’t spread. It tasted very nice, but the pizza dough could stand to have a little more give underneath, a little more color on the edges and a bit more salt in the recipe.

Having just opened in late May, I have yet to work my way through more of the menu, but these initial tastes have been largely enjoyable. Given the high price point of the dishes at Herringbone, it’s relieving to find they are so solid. Even given the average earnings of La Jollans, I wonder if EHG’s number crunching might have turned out rates a bit too high for Herringbone to catch fire as quickly or as enduringly as Malarkey and company had hoped. 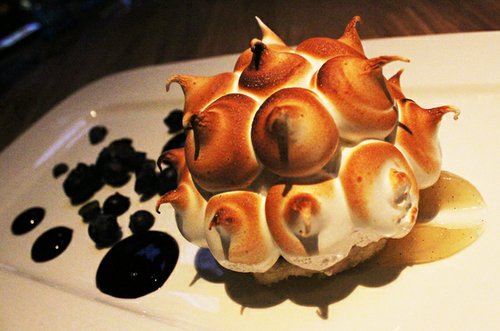 EHG pastry chef Rachel King's Baked California is worth a trip to Herrinbone on its own for layers of torched meringue, icy blueberry, and soft lemon cake.

Prices aside, it’s evident EHG has learned from hiccups experienced during the early days with their previous venues, and how to more ably avoid certain obstacles. With the exception of sometimes spotty and semi-confused service (much of which has to do with having to learn a pretty extensive menu and service a large number of patrons when they have a packed house), Herringbone is running much smoother than Searsucker and Burlap did when they debuted. 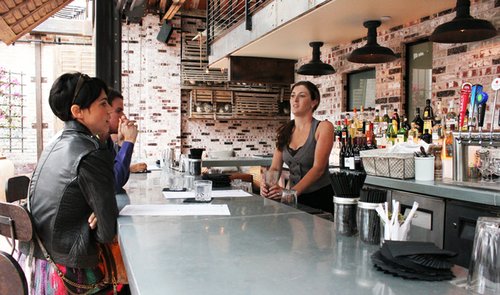 Is Herringbone built to last? Impossible to say at this point. The bottom line at this early stage is that this new restaurant has realized an important early goal—proving itself worthy of repeat business and the attention of a watchful eye as it matures.