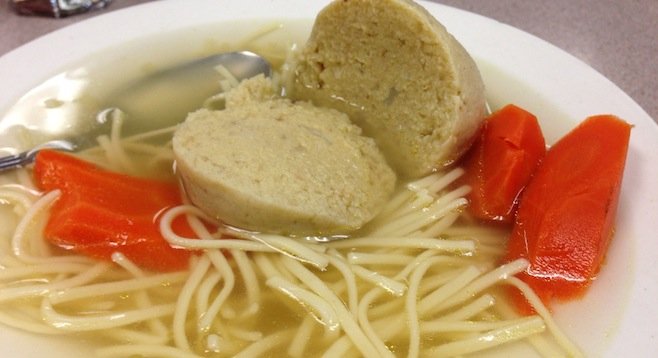 Last week, it was cold and rainy when I visited the KPBS studios to talk about fun events in town on Midday Edition. The station is located at San Diego State University, just an exit away from San Diego's best Jewish deli, D.Z. Akins. Don't agree, or know of a contender for best Jewish Deli? Let me know, I'd love to check it out. For now, though, when anyone's craving latkes, knishes, or challah, D.Z. Akins is where I send them. Though that's not what I order when I go there.

The menu is gigantic, but I never look at it. I know that I'll be getting a bowl of "Jewish Penicillin," which is chicken broth (that often overflows onto the plate below) with matzo ball, noodles, and carrots. David enjoys the bucket of pickles (there's one on every table). He says they remind him of the ones his father makes. I find them a little too bitter for my taste. We each get our own bowl of comforting goodness and then share grilled knackwurst served on a grilled bun and sauerkraut. Rather than fries, we get the potato salad (my favorite potato salad in the world -- usually, I can't do anything with mayo). The potato salad is lightly sweet and the veggies within are fresh, making it an ideal compliment to the vinegar of the kraut. One of the things D.Z. Akins is most famous for is its bakery and deli area, where you can get imported goods. I never have room for dessert, but I love perusing the colorful sweets in the case, which change with the seasons.