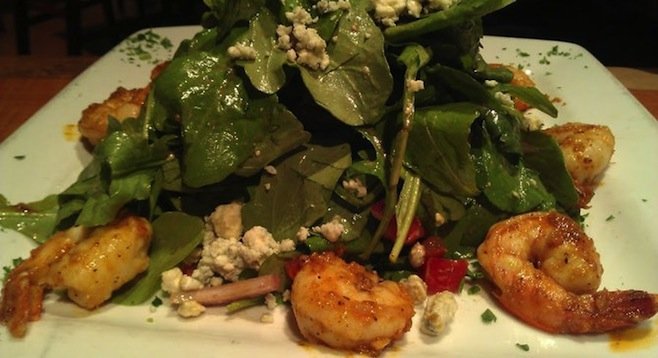 As I’ve said before, I like it when old houses get turned into restaurants. The whole ‘we’re eating the living room!’ aesthetic lends an Old World feel to the dining experience that comforts me. La Jolla’s Public House, at the very least, gets that aspect right. The two-story red house is way too small to be a restau in and of itself, so there’s a large, heated patio that’s also home to the bar. I prefer the inside tables, however, where the homey feel is at its strongest. 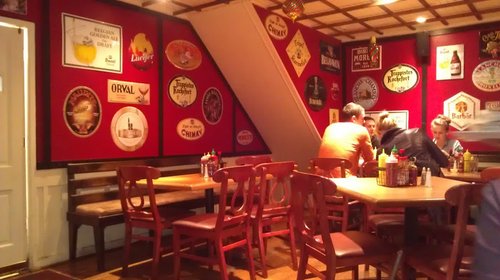 While the list of bottled beers impresses with its global selection, the high price of entry discourages overzealous forays. Looking at fifteen...twenty...even thirty dollar bottles of beer has me questioning price markups and casting my eyes towards the drafts, which satisfy for a more reasonable $5-$8. Still, if I were feeling spendy it could be fun to pick a random bottle from a random part of the world and explore via drinking.

One rad advantage of the Public House is that it’s licensed to sell bottled beers to go! Found a good brew? Bring one home!

Boastful signage alleges that the Public House’s burgers are “locally world famous,” which I’ll consent is kind of cutesy, in a snarky way. Offering a rabbit burger ($14.50) as a special was a bold move, since rabbit is such lean meat that it would be hard to make a succulent burger out of it. I had to try it, natch, and it wasn’t particularly inspiring. Dousing the whole thing in politically incorrect A-1 knockoff sauce salvaged the experience, but only just. The fries on the side were nice and crispy, but so salty they made the already super-salty burger seem bland by comparison. The rest of the burgers on the menu seemed overdone or overly pedestrian, and I found the pale, wholesome-ish bun to be a fence-sitting compromise between buttery hedonism and seedy, grainy hippieness with the disadvantages of both. 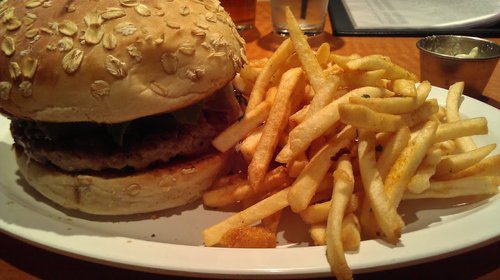 A cajun shrimp salad ($12 and more salad than shrimp) was likewise salted like bacalao and dressed to kill (via oil and sodium). It neither failed nor won, choosing instead to shuffle its way into mediocrity. At least the shrimp were not overcooked.

Faced with all that fun beer, “meh” aptly describes the food and service, which began over-attentively and faded into forgetful, that I received at the Public House. It’s a nice idea executed poorly. I’ll be curious to try the fare at the Encinitas Ale House, the north county sister restaurant, and see if it compares favorably.