Just as things are getting difficult on the Tour, a surprise stage victory by an unlikely contender!

I didn’t want to leave the house and go down to Point Loma. It was cozy at home and I could have gotten into bed and stood a chance of finishing Dead Souls before the library sends a death squad after me. It was with great reluctance that I forced myself out the door and down the freeway to visit Jin’s Grill in a Midway strip mall, right next to a Subway, of all things. 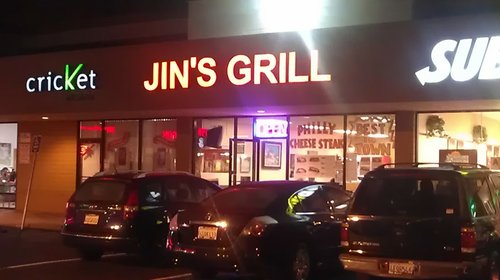 I shuffled dissolutely across the unimpressive restaurant, miffed by the Winslow Homer-esque art and the orangey-brown tables that could have decorated the inside of any restaurant in any time at any place. Yet another average sandwich, I thought. But then I saw the little sign on the counter, left there in place of the owner who was out back cooking.

Now I’m in the kitchen. I’ll be right back to serve you. Thanks!! --Jin 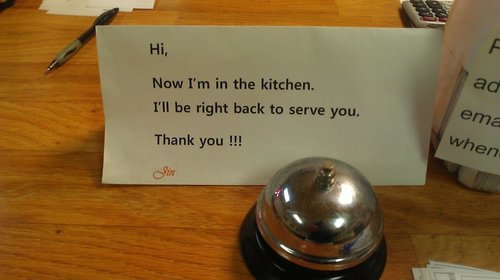 Something about the earnestness of the placard charmed me. Plus, as I read the menu, I realized that Jin’s only has five entrees: steak, chicken, burger, and pastrami, all served the same way, and a fish sandwich with avocado. Jin, in his wisdom, recommends that the subs be made with lettuce, tomato, pickle, mayo, mustard, and ketchup. The “hoagie style” Philly is often an option at the places I’ve been to, but Jin’s elevated it to prominence, so I had to try.

“You have to ring the bell,” said a man’s voice as I stood at the counter. “Otherwise he’ll never know you’re here.”

I rang the bell and, sure enough, Jin called out, almost singing, that he would be there in a minute. A very slight and cordial man, he came, took my order, and then disappeared into the recesses of the kitchen.

As I sat and waited, I saw a business type guy come in and linger around the counter. He didn’t ring the bell and I think he ended up vanishing without ordering food, perhaps under the assumption that Jin didn’t care enough to take his order.

Ring the bell, people, it is entirely worth it.

My sandwich, delivered to my table by a gracious Jin, was about eight inches long and reasonably priced at $5.95. It bulged with meat to the degree that I wondered where the toppings were. One bite revealed that they were underneath the steak, lettuce and everything.

The idea of putting condiments and salad on the cheesesteak seemed unorthodox at first, but the effect mesmerized me. For starters, Jin grills some high-quality steak. It was toothsome, delicious, and plentiful. With all the toppings on it, the cheesesteak had morphed into a kind of beautiful mutant, a hybrid of In ‘n’ Out burger and submarine sandwich. Ketchup, mustard, and pickles all contributed something amazing to the flavor. It was nothing short of incredible, even after two weeks of eating cheesesteaks every damn day. The bread was extra soft and did an admirable job of soaking up the various juices that leeched from the sandwich.

This tour is wrapping up, and it looks like Jin’s Grill might be the place. Sure, Jin broke the “rules” a little bit: there was all that salad on the sandwich and no Whiz to be seen. But I left the place with the elusive satisfaction that I’ve been trying to find in a cheesesteak.

Your scraping the barrel of cheesesteak locations. You gotta head north. The SD Reader lists top places in SD county each year and your missing the top names. Philly Franks in San Marcos is one.

I am dead serious in stating that Jin's is a dark horse contender for the general classification in the Tour de Cheesesteak! I went out there with "scraping the bottom of the barrel" on my mind, but the sandwich there knocked my socks off.

Philly Frank's is somewhere I am going to really try and get to, but San Marcos is a hike for me. There are logistical concerns here that didn't come to mind until I had tried to eat at every cheesesteak place I could get to.