Lobsters on a Rooftop by the Sea

My friend had a birthday and he wanted to go to Mexico so we took a trip to Puerto Nuevo for some famous lobsters. I got all the travel info I would need from puertonuevolobster.com. Barring an immediate wrong turn just after crossing the border and some impromptu, map-less navigation, we made it to Puerto Nuevo in good time for an early dinner. As we drove south on the toll road, I was struck by the contrast between the mega hotels along the coastline and the surrounding neighborhoods of decrepit and decaying buildings. It had the tragic beauty characteristic of modern Mexico, at least as I've experienced it here by the border.

I got the feeling that there was a heyday of lobster cookery in Puerto Nuevo which has since passed. I wouldn't call the area "in decline," but I recognized the look of faded, formerly ambitious developments made during boom times. Many of the restaurants were shabby, but not in a discouraging fashion. I didn't see anywhere that looked dirty or unwelcoming, but I received the impression that few of the town's thirty-plus lobster houses would be making big remodels any time soon. Despite that, there were lots of visitors from Mexico and the US who turned up for lobster on a Sunday evening.

By the end of my meal I had figured out a few things:

1. Pick a restaurant based on where you want to sit
As far as I could tell, the restaurants were all interchangeable. Maybe the Ortega's family of restaurants commanded more real estate and some of the smaller places lacked any glitzy decor, but every place sold the same food at the same price, or near enough to it. I ended up at a place called Rene's, but only because it was a nice day and I wanted to sit on the roof and look out at the sea. If it had been scorching hot, I would have picked somewhere that looked cool.

2. Drink beer
Lots of the lobster specials came with a free margarita. Drink that one, but then move to beer. Beers are half the price of cocktails and I didn't see any really appealing drinks being served. An alternative strategy is to buy a little tchotchke in any shop that offers a free tequila shot. "Hey, buy some shit you don't need and I'll give you a free tequila shot," is the phrase to keep an ear for. Repeat that practice a few times and drinks at dinner become less important.

3. Order for the table
Don't bother ordering your own plate of food. For a party of four, we ordered two lobster specials that featured three petite lobsters, rice, beans, and toritllas for $16 each, a fried whole fish ($12), and a coco campechana ($15). The campechana was a a seafood and coconut meat cocktail served in a hollowed out coconut shell. The fish was some sort of sea bass that had been scored up the side and plunged whole into the fryer. Minimally prepped and descaled, it was somewhat a chore to eat but the piping hot meat was plentiful and fun to pick from the bone. Doubling up on the lobster specials got us a giant platter covered in fried lobster. That was very easy to share. 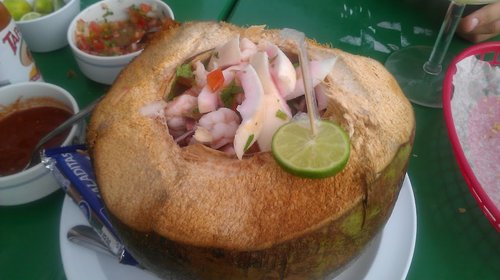 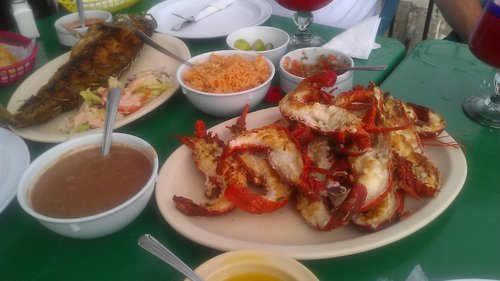 4. Get the big lobsters
The hawkers on the street call out the "three lobsters for $16" special all day long because it sounds like a good deal. In a way, it is. But the lobsters on those plates are not much bigger than shrimp and have about the same amount of meat. I found they tended towards being slightly overcooked, perhaps due to their diminutive size. When I saw the giant lobsters being carted out and displayed to potential buyers, I knew that was the way to go. Yes, they might cost $20-$40, but if you've driven all the way to Puerto Nuevo to eat lobster, then by all means eat lobster. There is an economy of scale at play with larger lobsters. More of their weight is edible meat, and there are more secret morsels to be rooted out than in the shrimp-sized juveniles. In theory, the meat of the larger crustacean would be less prone to overcooking as well. 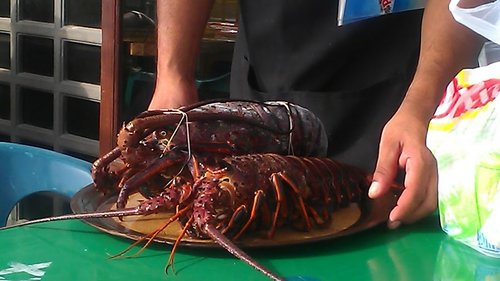 5. Go to the little ice cream shop on the northern edge of town
They had this mango sorbet studded with salted plums that had been frozen in a plastic Dixie cup by hand. The guy at the shop pulled the dessert out of the cup, added a big squirt of chamoy (a salty, fruity brine spiced with chilis), and replaced the sorbet/popsicle to soak up the sauce. It was salty, savory, and sweet all at the same time. It was like $1.50. Gringos might proceed with caution on this one, but it's totally worth it to acquire the taste.

My contribution to the greater discussion on Puerto Nuevo lobster culture is, of course, somewhat minimal, but I think I have already discovered a pretty good formula. Next time, I'll go down, sit somewhere pleasant, order the biggest lobster in the building, and crack open as many chelas as I see fit.

Thank you, sir! Glad to get approval from the resident Baja maestro. I am getting into TJ and Baja stuff more and more lately and really enjoying it. New gastronomical nooks and crannies for me to explore.