Catching Up with Pizza Port Carlsbad at Local Habit

San Diego really is the Napa Valley for craft beer. The region is rich with opportunities to experience exceptional brews. The latest proof of that came to me last week when, on consecutive nights, I had the chance to sample beers from the reigning best large and small brewpubs in the U.S. (as determined at the Great American Beer Festival, the largest and most definitive craft brewing competition in the country).

Both of those operations call San Diego home. Pizza Port Carlsbad is the big boy of the pair. I caught up, broke bread, and sipped suds with their head brewer, Ignacio Cervantes, at Local Habit during the latest of the venue’s monthly Brewmaster Dinners. Those affairs feature five courses paired against beers presented and explained by the brewer du jour.

The majority of the beers Cervantes contributed were recently entered into the upcoming World Beer Cup. Held every two years, that competition is the craft brewing industry’s Olympics. Breweries the planet over send their beers in to vie as the best-tasting, most textbook versions of 90-plus individual styles. San Diego breweries have historically done well in the WBC and, after sampling Cervantes’ entries, it would seem Pizza Port Carlsbad has an above average shot at bringing home some medals. 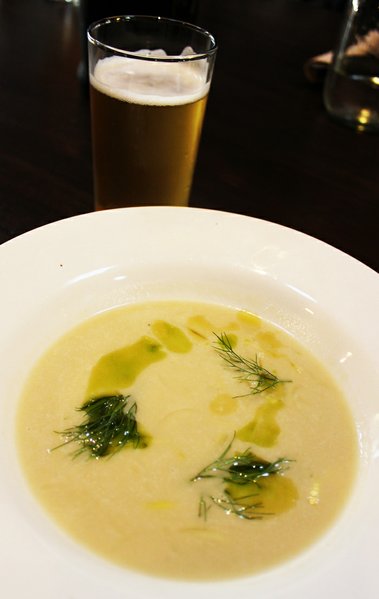 The first beer of the evening was a Belgian strong called Revelations that was a graceful, easy drinking, and packed with big time fruit and spice in the nose and on the palate. A silver medal winner at the Great American Beer Festival the past two years, it matched up well with a roasted fennel and leek soup from Local Habit chef Nick Brune. The vegetal licorice notes and slight tartness of the soup (which was extremely creamy and warmingly coating despite having just a touch of cream in it) made for a nice sweet-and-sour interplay. 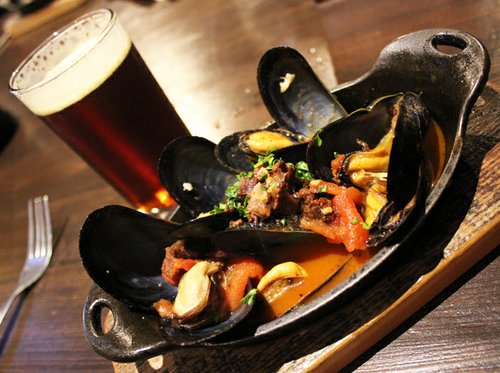 Another splendid pairing was 547 Haight Imperial Red Ale (named after the address of San Francisco bar Toronado...ever heard of it?) served alongside a dish of steamed mussels. Beer and mussels is a classic Old World pairing, but Brune brought a fresh Southern-inspired touch to his bowl of bivalves, adding in some salty, spicy lamb tasso. Tasso, a cured meat of Louisianan origins, is typically made using pork shoulder and jowel. Going with lamb added a slight gaminess as well as a grassiness that enriched the beer’s sweet malt character and rewarded Brune's waltz beyond the lines of traditional Tasso prep. 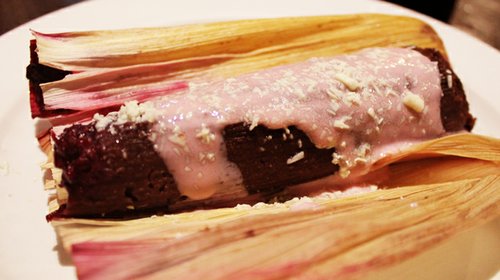 Perhaps the best duet of the evening was Night Rider, an imperial stout cask conditioned with Mexican chocolate and chipotle pepper (a well-executed idea from Cervantes’ brewing assistant, Mike Aubuchan), and a cylinder of cocoa-infused masa that was steamed in a corn husk, tamale-style, and topped with a blackberry sour cream as “salsa” and shaved white chocolate as the sweet treat's Cotija cheese stand-in. The cocoa and chocolate came together seamlessly, as did the fruitiness from the berries and the smoked chile. 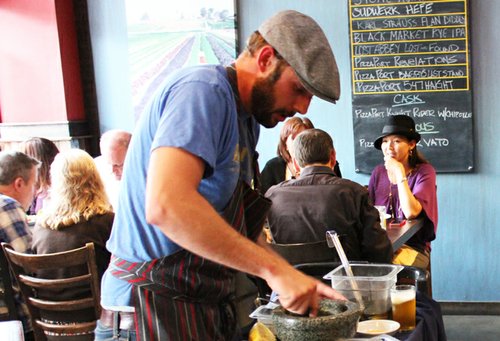 This was the second Local Habit Brewmaster’s Dinner I’d attended. The first, which was held during San Diego Beer Week and featured quaffs from Hess Brewing, was just as delicious. Chef Brune is doing right by our region’s ingredients, those who produce them, and the diners who consume them. Any night there is bound to turn up good food and beer, but these dinners are even more special. I highly recommend signing up for one that features a brewery you’re a fan of or are curious about.

Local Habit is located at 3827 Fifth Avenue in Hillcrest.

I don't think you can call SD the Napa Valley of beer when none of the ingredients that go into the beer are grown here. Even the water fell as snow somewhere else.

Your pompousness makes me laugh, Hernandez. Your pretentious descriptions are as ridiculous as your prose.

Having read his posts and the FEAST blogs for a while, it does seem that Hernández worships at the altar of the S.D. "craft beer" industry.

Rowe, Hernandez, Fikes...A Slobbering Love Affair with S.A.P (A torrid love affair with the San Diego media and Stone, Abbey, and Pizza Port. There are 28 other great breweries in S.D. Would love to here about them.