or, Will Military Folks Enjoy a Ludicrous Military Film, Even if it's Free? 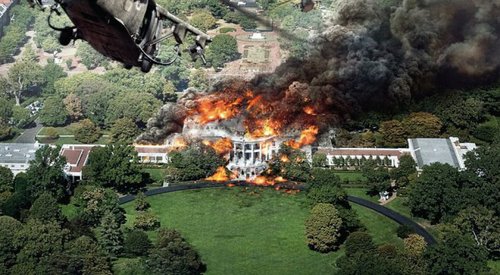 So White House Down is performing below expectations. And now comes this:

CULVER CITY, Calif., July 2, 2013 – On Independence Day, to thank America’s troops for their sacrifice and service, active military personnel and veterans will be admitted with one guest to see Columbia Pictures’ White House Down for free at any Regal Entertainment Group, AMC Theatres, Cinemark Theatres, or Carmike Cinemas theater by showing proper military identification.

I am all for rewarding military service. But I would suggest that it might have meant more if they'd made the announcement before the disappointing opening weekend.

On top of that, it led me to wonder: do military people like movies in which the military looks a little silly? In White House Down [SPOILERS, sort of], a tiny band of terrorists a) wipes out a substantial United States security force in and around the White House, b) takes out a tank before the tank can get off a single shot, c) takes out three Black Hawk helicopters, and d) well, I won't give away the final bit, but it didn't strike me as totally realistic, or even believable.

Yeah, yeah, I know realism isn't the point in a summer blockbuster. I just wonder if military folks see all the military hijinks and think, "Ha ha, wouldn't it be fun if things were really like that?" or, "Gosh, doesn't anybody give a damn about what we really do?" Basically, where does the suspension of disbelief come in and how much does it cover?

Possibly interesting data point on this one: I was talking to a fine fellow the other evening about possibly paying him a visit on his boat. He mentioned that his boat was named The Contessa Teresa, after James Bond's wife in On Her Majesty's Secret Service. It turns out the man's father was in the spy business, and the two of them bonded over Bond films. Not The Spy Who Came in From the Cold or Tinker, Tailor, Soldier, Spy, or The Constant Gardner, or any of that nasty, humdrum, "real" stuff. Nope - Bond and gadgets and SPECTRE and all the rest of it. That's what worked for them. I thought that was fascinating.

Haha, you're probably right. Escapism probably wins. By the way, in any number of military webcomics the resounding theme is boredom. Dunno if a free "blockbuster" beats whatever else they'd rather do on (what I'd assume is) their day off...