Phew! Lots going on, folks! Fall is well and truly upon us.

Looper is the hot big release of the week, but it left my colleague Scott cold. Pity. I'm a Rian Johnson fan - even liked Brothers Bloom.

On the indie side, there's the angsty high school movie The Perks of Being a Wallflower, adapted and directed by the guy who wrote the bestselling YA novel on which it is based, Stephen Chbosky. I liked it! I also interviewed Chbosky about the experience of adapting his work for the movies. Good times.

(Why only one star for a film I liked? I cite this paper's founding critic: "Very recently a correspondent did what I have never seen fit to do, and proposed a one-word summation of a one-star rating: 'terrible.' Where would he have gotten that idea? Are the reviews of one-star movies studded with 'terrible' and its synonyms? If so, show me the evidence. The key, or what passes for one, speaks of 'antipathies' solely in connection with the black spot. 'Priorities,' it says, 'are indicated by one to five stars.'")

Moving on to the goofy surprise of the week, the college a capella comedy Pitch Perfect, which I thought was better than it had any right to be. Maybe I was just feeling daffy. Or maybe I just like Anna Kendrick.

I would be pleased as punch if Stars in Shorts started a trend of big-name actors appearing in short films. Admittedly, I wanted to poke Neil LaBute in the snoot after seeing After-School Special, but then, I suppose that was the point. Happily, the shorts featuring Judi Dench and Jason Alexander restored a little of my savaged faith in humanity. And he format could be just the thing for the diminishing attention span of the American public.

Speaking of interviews, here's a chat I had with the writer-director behind the big screen incarnation of Puritan Punisher Solomon Kane, out this week in limited release.

So far, we've played hooky on the education drama Won't Back Down, but while he was skipping class, Scott subjected himself to Hotel Transylvania. So the crime provided its own punishment.

Both Scott and yourself have more dirty jobs than Mike Rowe. 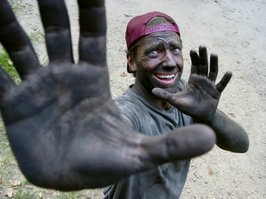