Entire San Diego Boy Scout troop comes out to each other

"Wait, you mean we're all gay? That's kind of anticlimactic." 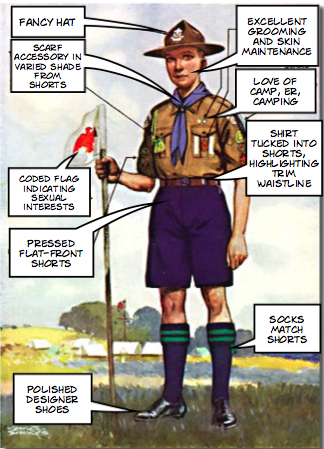 When the word came down that the Boy Scouts of America was discussing the elimination of its universal ban on homosexuals - instead leaving the question up to local sponsoring organizations - Bankers Hill Boy Scout Jack Johnson knew what he had to do.

"I realized that the time had come to make a stand," he recalls. "It was time to force the issue. It was time to come out as a Scout. First, the move would put pressure on the national discussion. Second, if the local ordinance went into effect, it would put pressure on my troop, which is sponsored by Rich's Nightclub, to make the right decision. They wouldn't be able to just consider the matter abstractly. They would know that banning homosexuals from their troop would mean banning me. Right after I had gotten my BMI badge." (The BMI or Body Mass Index badge, is given to scouts who achieve a body fat level of less than 6 percent.)

Johnson resolved to make his announcement at the troop's annual Greek-style wrestling tournament. "I'm a pretty good wrestler, so I usually win. I figured that the guys would be more receptive to my announcement after I'd just pinned them to the ground in a contest of manly strength and skill. Plus, when I get good and sweaty, I look kinda like Brad Pitt in that one scene from Fight Club. Presentation counts when it comes to stuff like this."

What Johnson didn't know - couldn't know, really - was that every single other member of his troop had made the exact same plan. "Rod Johnson, Dick Johnson, Lance Johnson, Peter Johnson, John Thomas Johnson, Willie Johnson - all of 'em. I stood up there at the podium in my loincloth, dripping oil and sweat, and proclaimed, 'I'm Eagle Scout Jack Johnson, and I'm gay!' And then someone - I think it was John Thomas - said, 'You're gay? I'm gay!' And it just snowballed from there. We were flabbergasted. I mean, it kind of explains a few 'Truth or Dare' moments from our camping excursions over the years, especially as some of our fellow Scouts left to pursue girls or sports. But still - who knew?"

As of press time, Rich's Nightclub had not made a statement about its plans should the local-sponsor policy be implemented.