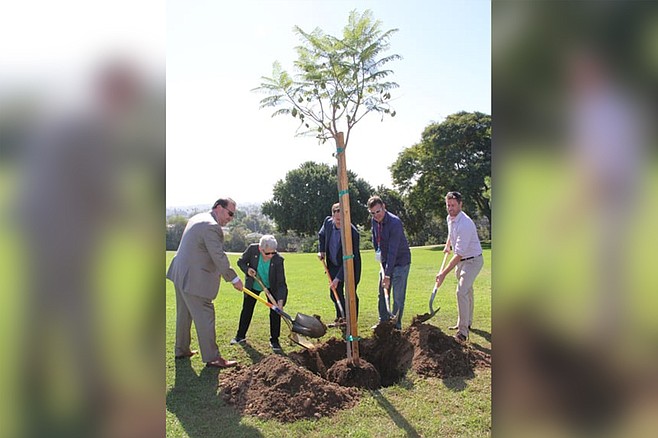 But don't expect a real response

There is talk among voters in San Diego’s council District 2 about starting a petition to recall Councilmember Jennifer Campbell who they feel is ghosting her constituents and their public safety concerns, most notably in Pacific Beach and Ocean Beach.

District 2 includes the communities of Clairemont, Linda Vista, Pacific Beach, Midway, Mission Beach, Ocean Beach, and Point Loma. “The District 2 residents are highly passionate people and suffer from the most crime throughout San Diego. It is apparent by all that Jen Campbell is out of touch and naïve to this fact and to her own district’s priorities,” a resident I’ll call Sue told me. “Therefore, District 2 has been learning to handle matters without the support of... Jen Campbell. And now, there is talk throughout District 2 of starting a recall petition.” 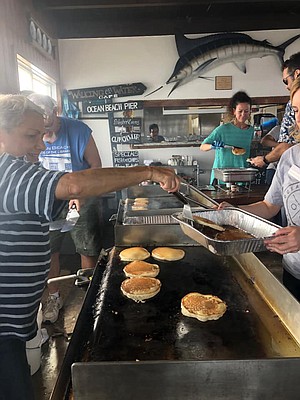 Jen Campbell flipped flapjacks at the OB Pier Pancake Breakfast, but she refused residents’ requests to walk along the OB Wall to see their health and safety concerns first hand.

Sue, a Pacific Beach resident and advocate for public safety, said she was initially optimistic about developing a relationship between Campbell and the community. Until she and two other residents scheduled an appointment to meet with Campbell at City Hall early in 2019 to discuss the need for help in the beach communities.

“Mind you, the three of us set aside two hours on a rainy day and drove down to City Hall to meet with Jen Campbell and her staff.... When we showed up to City Hall, two of her staff members informed us that Campbell had to leave due to a family emergency and she wouldn’t be joining us. The meeting went on as planned but was cut short due to the staff’s time constraints. We didn’t get through all of our issues and we were somewhat rushed out of the meeting. We sent an email the following day to reschedule with Jen Campbell herself and they declined…. This was the beginning of a rocky relationship.”

According to the women, Campbell herself has never responded to their emails, hasn’t shown up to events, and heavily relies on her staff to handle everything. “We rarely ever see her in Pacific Beach,” Sue says. “She recently did a photo op at Kate Sessions to plant a tree, which shows how completely out of touch she is to our crime issues and our homeless problems. I consistently email her staff, bringing the problems to their front door, but they respond only with generic robotic political jargon…. I invited them to our successful Pacific Beach crime walk in September and received no response. This walk resulted in Pacific Beach starting a Guardian Angel chapter for those who wanted to get involved in improving the crime in our community. Not once has Campbell’s office reached out to see how they can assist.”

Another Pacific Beach resident, Kris, feels the same way. “She’s not here, ever. She never comes to Pacific Beach Town Council meetings, or community events, or walks or attends anything we invite her too. She sends staff. This is unacceptable, especially since she is supposed to be our representative for three more years.”

Campbell was invited to an annual Pacific Beach Town Council event honoring first responders. She was a no show.

In her first newsletter, The Campbell Chronicles, published in February 2019, Campbell said she believes that the “City Council is the customer service department of government,” and “I’m honored to be representing you at City Hall, making sure the voices of our Beach and Bay Communities are heard... our office staff has been out to all the areas of the district. Our community representatives have been attending community meets & gatherings and checking areas that need attention.… That kind of constituent care is of the utmost importance to me. That is why I’ve started our ‘Java with Jen’ program, a monthly community coffee. It’s a great way for all of us to get to know each other and talk about your issues and concerns. Each month, on a Saturday morning, we will be having coffee and conversation in a different area of District 2, so watch for our next one in your community.’

“I went to Jen Campbell’s Java with Jen one-on-one meeting recently at the OB Women’s Club,” Kym Keirman told us. “Was given five minutes to speak with her. Found her to be dismissive, defensive, blamed everything on her predecessor, and claimed much of it was out of her hands and falls to the Mayors office.... I was then moved along after five minutes.”

At November’s Java with Jen her reps told those in attendance that “she was sick” and couldn’t attend.

In March 2019, OB resident R.G. Ryan emailed Campbell’s office. “I am a registered voter in your District residing in the community of Ocean Beach,” Ryan wrote. “I walk our streets every day, weaving my way among and through clusters of often violent and aggressive transients and homeless individuals. Crime has increased exponentially as a result of a lack of policing and enforcement of basic laws. I — and others like me here in OB — feel abandoned and ignored by our elected officials. I am writing to remind you that come election time, this will not be forgotten. We vote. We pay taxes. We matter. Please help.”

In response, he received a form letter thanking him for his correspondence.

Kevin Hastings, who sits on the Ocean Beach Planning Board, commented, “It’s been a frustrating and disappointing experience so far, but I remain hopeful. She doesn’t have many fans in OB. Many of our needs are being ignored more than usual. She says she was motivated to serve by the city’s poor response to the Hep-A outbreak... well OB is ground zero for these type of problems and it’s only gotten worse on her watch.”

In Campbell’s October 2019 newsletter, she wrote about “our unsheltered crisis” being a top priority for her office. “As a physician I deeply understand the health risks of homelessness… the health ramifications for our unsheltered populations are horrifying.’

Rick, who has lived in OB since the 90’s, is frustrated. “There’s a double standard. Some other coastal towns don’t seem to have the problem OB does, so yes, our representation has been asleep at the wheel,” he said. “I realize some of the issues like people living in vans have been publicly identified, but I can assure you that enforcement is not a priority. We still see the vans around town every day and night. We still see the travelers openly using drugs and consuming alcohol, illegally selling items including drug paraphernalia such as crack pipes — just saw it this weekend — littering, burning illegal beach fires, letting their dogs roam freely and not picking up after them, blocking public passage, intimidating people, et cetera. My wife and I have direct experiences with all listed. The GetItDone app is not a rapid or even guaranteed response. It seems like a widget to placate people. It’s extremely frustrating… in general there simply seems to be a lack of enforcement in our City. Yet if I, as an approachable person who looks as though they have something to lose, was hanging out openly on the beach drinking or smoking pot, I’d be cited.”

To address the homeless crisis, Campbell, along with the San Diego Housing Commission and reps from the County’s Health & Human Services Agency hosted a community workshop on December 4th to better explain what the city, county, and other agencies are doing to combat our homeless crisis. “Oh great, a lecture on homelessness,” resident Sierra Marie said. “It should be about how we are absolutely powerless against these travelers and no one with authority is doing anything. What a joke.”

During the workshop, questions about mental health and addiction were blatantly avoided, and again, community concerns were ignored. “Well, I did make it [to the workshop],” Leslie Klukas told us. “It was ridiculous. After it was over... I walked right up to Jen Campbell, introduced myself, said I had never been to one of these meetings, but was taken aback by how out of touch they were. I asked her when was the last time she had walked the beach wall in OB. No answer. I told her I live here, see and hear it every day, and that she has failed us. I went on and on, but her team came immediately to drag her away for a photo shoot.

Resident Tom Marshall attended. “All of the important officials at the meeting failed to address any of the transients, addicts, drug dealers, rogue charities, and non-existent law enforcement.... No one mentioned the major problems of Ocean Beach. Jen Campbell and her ilk are completely out of touch with the situation.”

When the Ocean Beach Pier was reopened in May 2019, after months of closure due to heavy winter storm damage, Campbell attended the event along with Mayor Faulconer.

Afterward, several community members invited her to walk along the seawall at Veterans Park to observe the health concerns — including public urination and defecation, used needles, encampments on the beach — affecting everyone, not just the unsheltered. She declined and all were told to send emails with their concerns.

In September 2019, the Annual OB Pier Pancake Breakfast took place. Campbell attended and flipped some pancakes. Residents who approached and wanted to voice their concerns were quickly whisked away with a ‘send her an email’ shout-out from her policy advisor Teddy Martinez.

In addition to health and safety concerns, many beach area residents have been clamoring for Campbell to push capital improvement projects regarding beach and park access. But, resident Areck Madden complains, “She has been invisible and certainly not helpful.”

“Our elected officials would do well to remember that they are entrusted with representing the voice of their communities,” said Nicole Ueno, a long time OB resident. “If that voice is dismissed or disregarded, people will be angry and frustrated. That is what is happening now in District 2.”

Classic politician....promise anything and everything to get elected, do a little here and there, but blame others for failure. Then work to get re-elected by making more unfulfilled promises, get termed out, run for higher office.

I am sure the she is working hard for those who financed her campaign. Follow the money and you will find who owns and operates her. Just another political puppet for those with money.

She's arrogant. Recall her before you wake up in three years and wonder why things are even worse.

Simple solution. Your police and politicians won't protect you. Carry weapons and defend your life and property.

Cambell's not out of touch. She's an extreme leftist and supports the homeless lifestyle, and, the criminals. The left believes you don't have to work if you don't want to, and, the government will take care of you and provide you with your needs. And, she thinks criminals are "victims" of the system and shouldn't be incarcerated at all. Great job by the voters of District 2 voting for her!