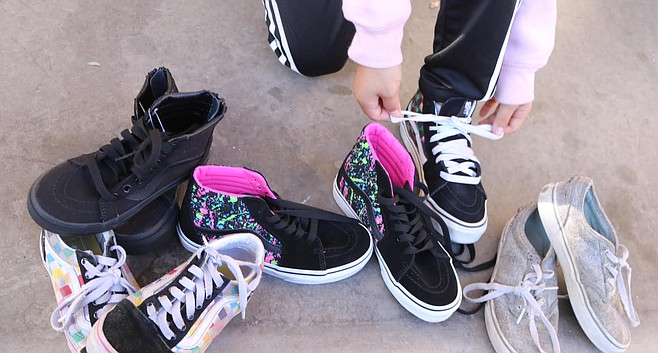 Mission Valley shows the appeal of the mall

"This is how we bond"

Patricia M. and her daughter, Eli, frequent Westfield Mission Valley almost every month; the two have been coming here since 10-year-old Eli was a baby.

“We like Nordstrom Rack,” Patricia said to me on the weekend after New Year's Eve. “There’s certain things that you cannot [efficiently] buy online, and that’s clothing and shoes. The stuff needs to fit well, and plus, it’s cheaper here.”

Nordstrom Rack sells predominantly mid-level brand clothing at “up to 70 percent off retail.” 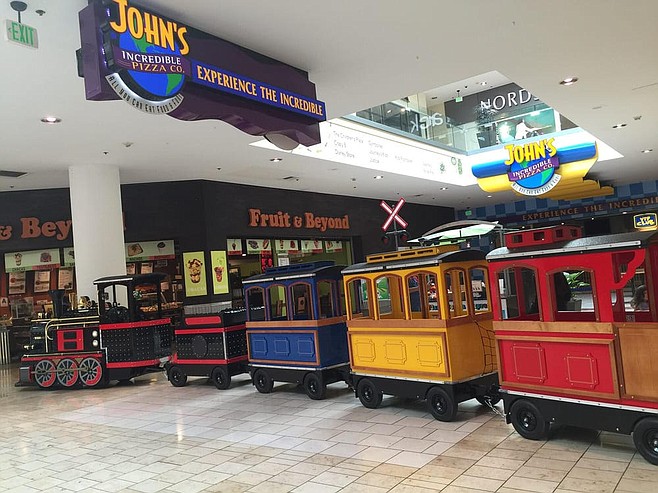 "She loved the choo choo train at Plaza Bonita.”

“I want a pair of Vans and Adidas,” Eli said. “My dad gave me a card from Nordstrom Rack. Then after, we can go to Wetzel’s [Pretzels]” — which is a few doors south — “here, I like their [mini and breaded] hotdogs.”

As I spoke to Eli, I wondered if young San Diegans still flocked to the malls, despite reports of stores and complete-malls around the U.S. closing. I spoke to Adam who works at Wetzel’s Pretzels on January 7.

“Teenagers like the cinnamon bits here,” Adam said, “then, they even take pictures of it.” 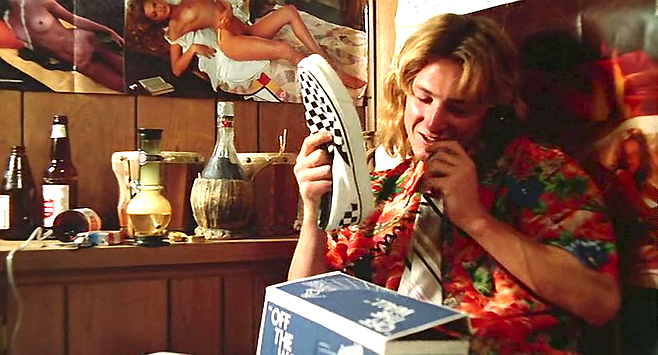 “From what you’ve seen and heard, what’s the favorite store for kids and teens here?” I asked Adam; “for clothes, I think it’s Tillys,” he responded.

Patricia and her husband had bought matching Doc Marten boots at Tillys.

“My husband, her dad, never gets it right on sizes or colors,” Patricia continued, “so, this Christmas, he gave us gift cards.”

“Where’s he now?” I asked; “he’s probably still at 24 Hour Fitness here at the mall,” she responded.

In 2010, when I initially attended the gym here, which is located next door to the GameStop video game store — I thought exercising in a mall was a bit awkward. Then, I realized how convenient it was: now I park closer to Target, next to the DyseOne- and Haslr-graffiti art murals in the underground parking garage. After exercising, I stop by Target and shop, which doubles as a cool down-period for my session. I’m not the only patron here with a towel around my neck — throughout the years, I’ve noticed younger adults still in their workout gear. 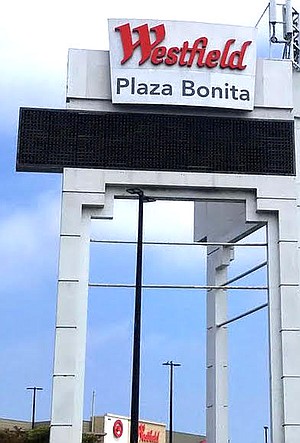 "Plaza Bonita reminds me of home."

(I noticed many visitors taking selfies and photos at the graffiti murals since they were painted in 2014 — then post about it and tag it on their social media apps.)

I spoke to Andre on January 7; he used to buy Magic the Gathering card packs at the comic store here.

“I think younger people mostly go to the malls for the movies,” he said, “or like to Target, and to eat or to kill time before their movie.”

Outside of the Target doors by Outback Steakhouse, I noticed another dad filling his kid’s backpack with candy and bottled-soda he'd just purchased from Target. “The movie starts in five,” he said, ” …. better hurry.”

Many movie goers come early, hang out in the mall, and enter the theaters early to get the best seats.

“I usually like Plaza Bonita,” he responded, “because it reminds me of home (Virginia); we didn’t have outdoor malls like this.”

Westfield Plaza Bonita is about 11 miles south of Mission Valley; I remember playing Street Fighter II at the video game arcade here in the early 1990s.

“When Eli was smaller, she loved the choo choo train at Plaza Bonita,” Patricia said, “that mall is parent-friendly; they have that indoor playground with soft flooring.”

Parents come here because of the sectioned-off play space and “good wifi.” Chai brought her daughter here for the train.

“There’s a family lounge with two private rooms where I can nurse her,” said Chai on the Yelp app, “and there are some stuff to play with for smaller kids.”

Another younger parent wasn’t too happy. “[The] kids' play area is ridiculous,” he said. “There’s a height limit and middle-school-sized kids are in there playing. Climbing on stuff and knocking all the smaller kids down.”

Journeys, a popular “cool” store for teenagers and kids, is south of the play space; I spoke to James, a 19-year-old employee here on January 7.

“Black and white Old School Vans and checkered slip-on Vans are the most popular shoes here,” he said. “Vintage trends in California skating culture is trending for us teenagers, that’s why Vans and Converse are so popular.”

“I’ve also bought Eli her Chucks (Converse’s Chuck Taylors) and Vans at Journeys,” Patricia said. “I’m telling you, Mike, kids need to fit the shoes, and Converse runs small for Eli. In the next two months, I’m going to have to buy her a new pair.”

“So you are saying Amazon, eBay, etc., cannot always fulfill the sizing issues of their patrons?” I asked.

“Look at how many people are returning shoes, today,” she responded, “now imagine how it is buying shoes online for growing kids .

“Plus, this is how we bond. A lot of kids identify with their parents through shopping, especially if we wear the same brands, and we catch up while we stroll through the stores.”

“Yes, I bought our daughter those checkered Vans that Jeff Spicoli used to wear,” I said.

On a quick search on the Yelp app for mall reviews, younger-looking Yelpers complained about pushy sales people at kiosks, dirty bathrooms, lack of parking and paid parking. Others raved about the the high-end stores at the Fashion Valley and UTC malls — and cool backgrounds to take photos.

“At your mall, did you see more or less younger people coming in 2019?” I asked James, who has been working at Journeys for two years.

“Yeah of course, more,” he responded, “the thing is, a teenager doesn’t always have enough money to buy a pair of shoes, like they’ll have ten or 20 [dollars] for a pair of socks and maybe like small accessories, and I’ve seen a lot more trends like that around the mall.”

“AMC is always a good place to go when I close,” he responded.

“Movie theatres, Target, clothing and accessories, and real life bonding will not be replaced by this,” Patricia said as she picked up her phone and saw a text.

Who will rent all the spaces left by closed retailers at malls? Macy's, JC Penney, etc. have huge footage. Maybe like the planned Horton Plaza, they will become offices, since location and parking are good. Those spaces can be leased for DMVs, insurance branch offices, doctors/dentists, law/CPA firms, and also gyms and senior centers.

A few may come along. For retailers to be successful in a mall setting they require a lot of traffic. Go to any large mall, Grossmont Center, Parkway Plaza, Mission Valley, etc. and you will see little foot traffic except for a few days a week. A small retailer can not afford the cost of being in a mall. Every mall has more and more empty spaces and no takers. To survive all malls will have to reinvent themselves. Some will be successful others will give way to other kinds of development.