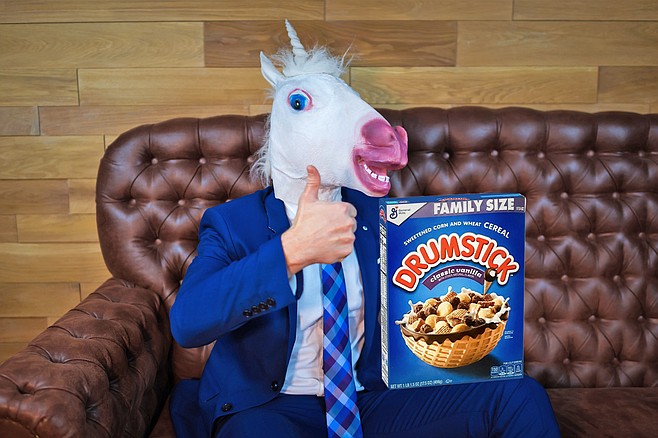 I get how things normally work. Hipsters are into hipster stuff before it’s cool, then, after the hipster stuff attains mainstream popularity, hipsters are “over it” because it’s too mainstream. That’s old news since 2011, when the first ever person told the joke about the hipster burning his mouth by eating pizza before it was cool (still funny though). Anyways, here’s more of a modern corollary to that particular principle. Is it ever possible for something to be totally mainstream, but also cool and hipster at the same time?! After you get over having your mind blown by that idea, please give it some thought.

Hold on a second.

[Picks up pieces of blown mind.]

Whoa. Heavy. But, yeah, totes possible. You know how venture capitalists and their ilk are always talking about “unicorns,” i.e. privately held companies worth in excess of $1 billion? Well, this is kind of like that, except it’s important instead of an idle pastime for the ludicrously wealthy. At least, I think it’s important, which is all that matters here.

Anyways, in rare instances, you get stuff that originated in the mainstream, but is nevertheless actually kind of cool and hipster for various reasons. Consider, e.g., General Mills’ recent release of a breakfast cereal flavored like Drumstick ice cream novelties. This is only the most recent salvo in a war between cereal manufacturers hoping to WHAM the cereal-consuming public with ever wackier, more ironic morning pseudofoods. This corporate assault on the American pancreas certainly contains a sinister edge, as the companies tend to debut these fanciful sugar sensations at Walmarts in middle America, which places unwholesome breakfast fare within reach of the Walmart-shopping public that needs it least.

At the same time, you can’t deny the coolness, from an adult perspective, of a breakfast food that emulates a beloved treat from childhood. If anything, Drumstick cereal should be more appealing to adults with a healthy sense of ironic humor than it should to little kiddos, who haven’t yet had the time to develop any memories worth being nostalgic over.

Thus, I feel comfortable enthusiastically endorsing the hipness of Drumstick (and other, similarly bizarre) breakfast cereals, notwithstanding their thoroughly mainstream origins. If I had to develop a kind of litmus test, it would be something like the following: could I, after consuming between three and seven Tecates at a local house party, corner an unsuspecting party guest, and praise the brazen, self-aware ridiculousness of something while simultaneously condemning its shameless consumerism? If the answer is “yes,” I might be looking at a hipster unicorn.

The test works for things other than breakfast cereals. For example, imagine it’s Memorial Day weekend, you don’t know me at all, and we’re both waiting in line for the single, pathetically overburdened bathroom in a North Park bungalow while a bunch of people we both vaguely know are washing down grass-fed burgers and organic hotdogs with too much Mexican beer. Apropos of nothing, I offer, “Yeah, sure, it’s a shallow bid to squeeze a few more millions out of an ailing franchise, but the producers sure showed some stones having the guy from Deadpool voice an electric hamster. It’s totally ridiculous, but, for whatever reason, I’m ok with Detective Pikachu.” Can’t argue with that kind of unimpeachable logic.