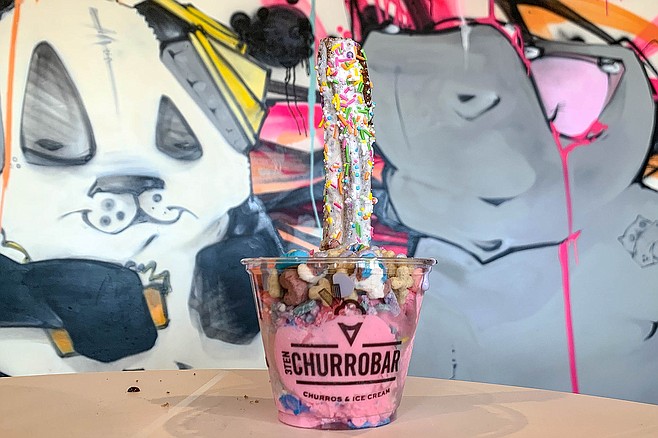 3Ten Churro Bar is an excuse to eat ice cream

Cinnamon and sugar churros get overshadowed by sweeter stuff

It took visiting a churro bar in Mira Mesa for me to learn where churros originated.

As a child of Southern California, I’ve always associated the crunchy, fried dough treat with Mexico. It’s served at Mexican restaurants, and offered for sale on the street the moment you cross the border to Tijuana, a specialty of popular churrerias in Mexico City.

Now that I’m finally paying attention, I’ve learned churros were actually invented hundreds of years ago in Spain, popularized in countries such as Mexico and Brazil through colonization. And it’s suggested that those in turn were inspired by Chinese donuts, youtiao, brought back to the Iberian peninsula by Portuguese sailors. 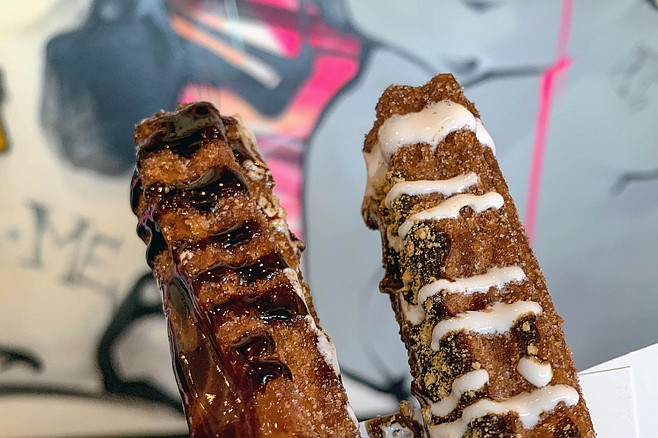 Called "designer churros," these are sauced up — no need for dip.

Fortunately, there’s not a lot of downside in being wrong about sweet things. Besides, I didn’t learn any of this at 3Ten Churro Bar. The counter shop on Mira Mesa Boulevard is decorated with bright colors, and while traditional, cinnamon and sugar sprinkled churros are offered here for $1.45 a pop, and 50 cents extra for dipping sauce (chocolate, vanilla, raspberry, nutella, or caramel), these are hardly enough to build a whole shop around.

A look behind the counter reveals what’s really happening here. That’s where the sauces and toppings are held for Churro Bars assortment of $2.45 “designer churros.” Rather than dip the churro in sauce, these are dressed like donuts, piled with sweet drizzles, sprinkles, and the like. So the choco caramel churro gets slathered with chocolate and caramel sauces. The choco mallow graham churro gets the s’mores treatment, drizzled with chocolate and marshmallow, then dusted with crushed graham cracker. 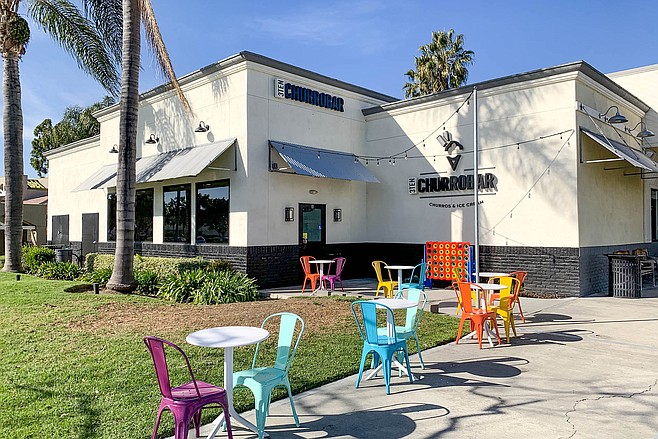 An ice cream shop specializing in churros in Mira Mesa

Spotting all those toppings behind the counter, I was reminded of so many ice cream counters. And that’s no accident. Because it seems the true purpose of 3Ten Churro Bar is to be an ice cream shop that serves churros. Several flavors of ice cream are offered beginning at $3.95 per scoop (bowl or cone): chocolate fudge crunch, Madagascar vanilla, tiramisu for example. A pint goes for $7.95.

What all this adds up to is the shop’s ultimate offering: churro ice cream. For $5.45 ($7.95 for a large serving) you get what amounts to an ice cream sundae, except there’s a designer churro stuck in the middle of it. So the cookie monster takes blue cookie monster ice cream, and stacks it with a choco oreo churro, so basically the whole thing gets slathered in chocolate sauce and oreo crumbles. That s’mores churro get paired with more chocolate, and a flame torched marshmallow.

I went for the most garish available, dubbed the Unicorn Oops: pink cotton candy marshmallow ice cream, covered in Lucky Charms cereal and “unicorn bark,” crumbles of white chocolate colored in pastel pink, purple, and blue. The churro shoves into it is covered in vanilla sauce and rainbow sprinkles. It’s a ghastly thing to behold, certainly far removed from the churros of 16th-century Spanish shepherds.

But it’s tasty. Ice cream is good, churros are good. My eyes might hurt from all the pink, but my mouth isn’t complaining.