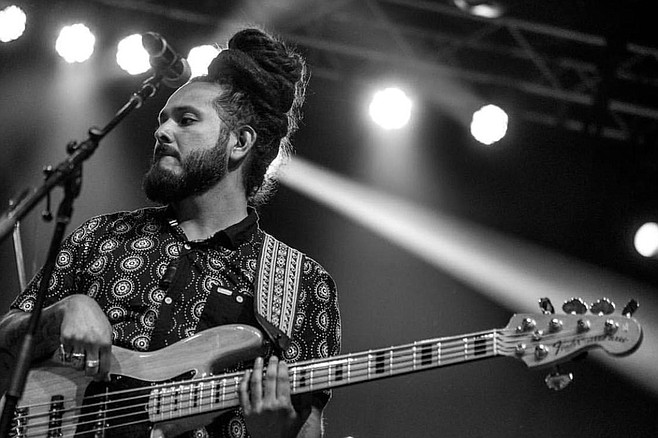 “The bass is like the foundation — you are the glue between the harmony and the rhythm.”

Local bassist Omar Lopez (Áfrojazziacs, Juice Box) came to San Diego in 2006, to study at San Diego State. He’s originally from Calipatria, down in the Imperial Valley. Lopez just turned 31, and he’s been playing the bass about half his life.

In town, he stays busy playing with multiple bands. I asked him if he could name his “top-three.” “I gig with a lot of people, so someone will be bummed out,” Lopez confessed. “But I really love playing with the Sure Fire Soul Ensemble — we’ve been doing a lot of recording lately. Another band I dig is Dornob, the brainchild of Farhad Bahrami. It’s a fusion of Persian classical music with improvisation. And it’s always an honor when Gilbert Castellanos calls me for a gig with his Latin band, which features Justo Almario and the late Ramon Banda, who we just lost.”

The main gig for Lopez, however, is his membership in the Original Wailers, led by guitarist Al Anderson. How did a kid from the Imperial Valley end up laying it down for one of the most iconic reggae groups of all time?

“I used to play in a funk band called the Earful. We did a West Coast tour supporting the Wailers. When their bass player experienced some problems traveling, Karlos Paeza of the B-Side Players recommended me as a substitute for a three week tour of New Zealand, and the rest is history. I’ve been with the band for five years now. It’s a trip, because I used to listen to them growing up, and it was all these San Diego connections that funneled me into the band.”

How does he see his role in the band?

“The bass is like the foundation — you are the glue between the harmony and the rhythm. I’m looking to balance were the note is placed alongside the sound and the color of each note. I can really geek out on these things, man!”

Does he ever get any weird vibes about being from a different place, culturally?

“Sometimes. Generally before we play, I might get some looks. Usually after we play, people let their guard down. But I’ve heard people express their disappointment that I’m not Aston [original Wailer bassist Aston ‘Family-Man’ Barrett, who heads a competing version of the Wailers]. I don’t try to be him — but I have done my homework, and I continue to do so.”

“There are moments, like when I was sitting at a café in Paris where it hits me and I can’t believe I’ve been given all of these opportunities.”

Lopez appears with the Original Wailers at Belly Up on August 7.