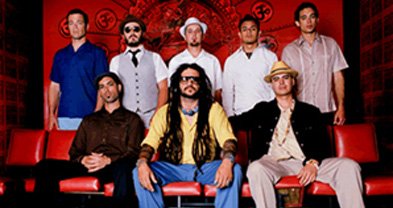 Karlos Paez, the dread-locked front man of the B-Side Players launched the group in 1994. First a Chula Vista punker, then later reinvented as an all-embracing roots musician and brass player, Paez sometimes sings songs in Spanish that are said to be about hot-button social issues such as political corruption and racism and the manner of issues that undocumented workers deal with. Heavy lifting as far as subject matter goes, but no matter. The B-Side Players are a dance band, and that’s always been their draw.

Reliable as a diesel engine, the Players are mainly known as a good-time group with a message. “We now represent the Brown Majority,” says Paez. “The surfer, suburban stereotype of California is changing fast. It’s not all bleach blondes anymore.”

According to says B-Side saxophonist Russell Gonzales, “San Diego is an odd place to grow up if you are Chicano...in my personal opinion, Chicano culture in San Diego is considered a novelty. It has been designated simply to a park in National City and similar areas were you can’t deny the overwhelming presence of the people who live there. These are the barrios of San Diego. They were designed to keep a culture and a race of people segregated from the rest of America; glass menageries to keep novelties like Mexican culture in.”

“There are other cultures in similar situations here, to be sure, but Mexico is in our blood, so this is who we represent. We are the Brown Side Players, and we are taking the culture out of glass cases and displaying it to the rest of the world.”

“People compare us to Ozomatli all the time,” says singer Karlos Paez. “But they used to come to see us play back before they became a band themselves.”

Trombone player Michael Benge also serves as Helix High School's associate director of instrumental music. His programs have included bringing in local trumpet player Gilbert Castellanos as a guest musician with the jazz honors band. “Kids in marching band get made fun of. It’s not cool, now, is it? But you’re gonna tell me Gilbert Castellanos is not cool?”

Benge remembers the first time he was in an honor jazz band and got to work with a pro trombone player. “I had no idea my horn could do all the stuff that his was doing, being limited to the repertoire that was available in school. It changed my life, that one experience.”