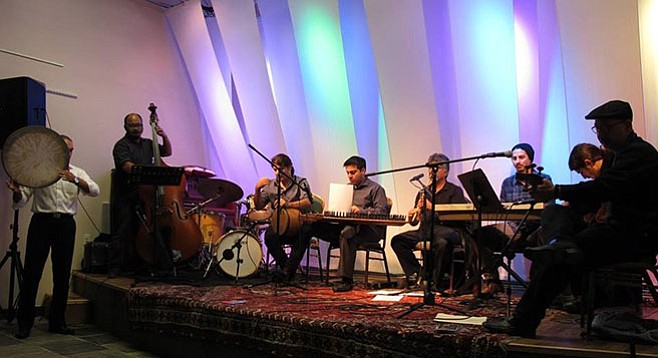 Based near SDSU, Dornob is a cross-generational Persian dastgah band, formed in 1985, playing avant-garde twists on classical Persian music. Their website describes their music as Persian classical, folk, and original dastgah music played with mixed instrumentation (East/West, acoustic/electric) in the spirit of postmodern world jazz.

“No one plays our style of jazz-influenced Persian classical music — not here, not in Iran,” says Farhad Bahrami.

In addition to Persian instruments -- tar, tombak, ney (bamboo flute), tombak and daf drums, santur, and qanun (zither) -- they also use fretless bass guitar, Persian-tuned keyboards, and other instruments to enhance their sound.

Their full-length Segah, on local world-music label Zaman, was recorded in April 2014 at Citizen Recording, with the eight band members augmented by Jesse Audelo on soprano sax. “I’m honored and humbled to have so many young jazz players interested in Middle Eastern music,” says Bahrami. “It gives me hope in the music, but more importantly, in the multicultural worldview of the young generation.”

An album called Standing Tall was released in 2016.