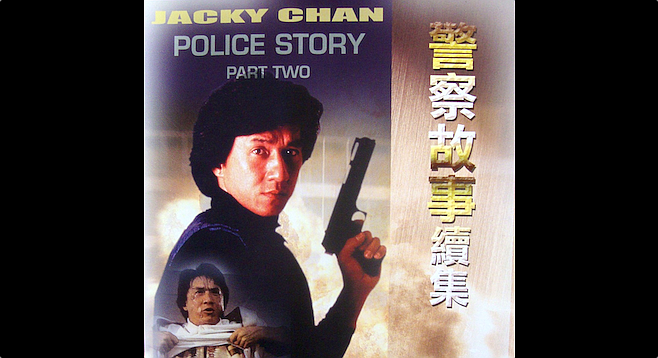 When was the last time you saw a shanty town destroyed in the name of an avalanche gag?

Thanksgiving comes early this week at the Ken when a pair of Jackie Chan kung-fu cop comedies hold what appear to be their San Diego premiers. There are no signs of either film being reviewed by Duncan Shepherd, and even if Police Story and Police Story 2 did play town, they hit the screen limping in truncated and badly subtitled form.

Remember when movies as a platform to sell DVDs was the leading rationale that drove the sales of physical media? Why are the 4k digital restorations of these Chan showpieces, complete with legible subtitles, headlining the Ken’s Week of Classics? To arbitrarily celebrate the 24-year anniversary of its release? Hell no! They’re being revived to help herald their upcoming blu-ray release on Criterion.

Chan’s comedies have an innate worldwide appeal. Who doesn’t love Jackie Chan? Passive until pushed, he’s nice to small children and animals and only kicks people when they ask for it. Not since Buster Keaton had a comedic performer literally broken bones to earn our laughs. (Count the bruises during the closing credits blooper reel.) There’s but one objection that demands attention: as Olive Oyl was to Popeye, Chan’s presentation of female characters is as oversimplified as his stunt choreography is complex. Not sexist or misogynistic, just simplistic.

Why didn’t his early films lap up on our shores with a major distribution deal in tow? How low must the industry have set the bar for Chan if his letters of introduction to American audiences were drivel like The Protector or a case of the Cannonball Run(s)? (It was Chan’s miserable time spent on the former that made him consider directing his own work.) Oddly enough, it was through a series of museum screenings at the Art Institute of Chicago’s Film Center that I first came in contact with Chan’s charming brand of exquisitely choreographed slapstick action.

In the eyes of the money men, one Chopsocky epic was indistinguishable from the next, which is generally true. (Generally, but not always. There’s no such thing as a bad genre, just bad storytellers.) They also knew that ticket buyers, unwilling to work for their art, would only tolerate action films from foreign lands if they were dubbed in American. None of that funny talking at the bottom of the picture for this quantified demographic target.

Even in their original form, the subtitling was atrocious. As many as three different translations were stacked at the bottom of the print. Media Asia’s inaugural DVD pressings offered two different language tracks (Cantonese and Mandarin) and nine different sets of subtitles to choose from: traditional Chinese, simplified Chinese, Japanese, Korean. Bahasa Malaysia, Bahasa Indonesia, Thai, Nil, and English. The print was small and the white titling frequently blended with the background. One watched with remote in hand ready to rewind for a reread in case the subtitles flew past too quickly, which they frequently did.

Running times also varied from copy to copy. One hopes Criterion will release the 106-minute extended cut. Original release prints ran anywhere between 88 and 101 mins. with the Media Asia copy clocking in at 94 minutes. Knowing Criterion, they’ll probably release all extant versions on as a 4 disc set that — if they’re anything like accident-prone Chan — will wind up costing an arm and a leg. As for spelling and grammar, about it ferget. The DVD box of the Fortune Star release gave star billing to “Jacky Chan.” Some prints of Police Story refer to his character Ka-Kui as Kevin Chan. Striving even harder to strip away the pretense, in the dubbed-for-dummies American release, it’s simply Jackie.

Police Story holds the distinction of being the first kung-fu police picture. Inspector Chan Ka-Kui (Jackie) is part of an undercover operation aimed at bringing down crime kingpin Chu Tao (Chor Yuen). The jaw-dropping opening stands as one of the most exciting (and hilarious) ever recorded for an action-comedy. Finding their cars perched atop a ramshackle mountainside village and with no place to drive but down, Chu and his team of baddies mow down shack after shack before bottoming out. When was the last time you saw a shanty town destroyed in the name of an avalanche gag?

Before you can catch your breath, Chan, armed with naught but an umbrella, does battle against a barreling double-decker bus. The climax finds our hero gliding down a pole entwined with miniature lights that results in more broken glass than a skein of Jewish weddings. It’s Jackie’s signature scene in the film he calls his favorite.

Police Story 2, a more traditional, but nonetheless superb action comedy, opens with Jackie being demoted to traffic cop. Chu and his gang return eager to do battle along with a new threat in the guise of a gang of mad bombers. Faulting the film for not being as tightly plotted or as dazzlingly carried out as its predecessor is silly. Few films can match the excitement of the first 30 minutes of Police Story and Part 2, acknowledging full well that it’s a sequel, not a remake, wisely didn’t try.

February 6: Singin’ in the Rain