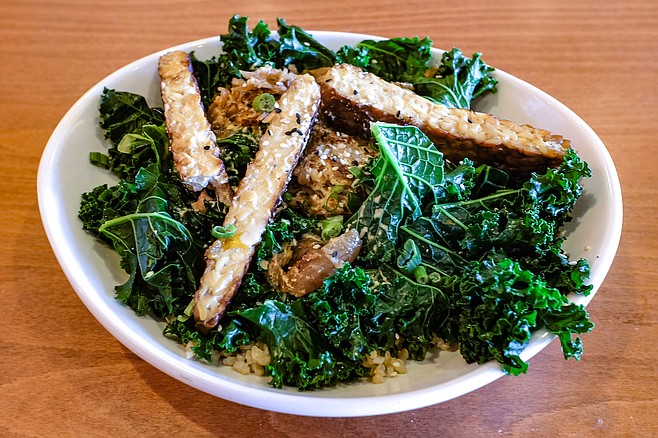 I added lots of sriracha.

For a week, I’d been eating too much of the American garbage diet: fast food, hot dogs, fried chicken, and many sides of fries. Hearty fare, fit for a Midwest winter freeze perhaps, but far from the new year, new me promises made to myself when 2019 began. Feeling trashy and nutritionally barren, I decided to ride the pendulum swing back towards the opposite extreme. I went out for vegan.

This landed me in the Point Loma location Native Foods, a fast casual chain that drops the right kinds of virtue signals: 100-percent plant-based, chef-driven, eco-friendly, and organic when possible. Better yet, when I started asking questions about specific menu items, the friendly staff-folk reached behind the ordering counter to pull out a large binder enumerating the ingredients used within each dish. For a business operating within the tradition of American fast food chains, that shows remarkable transparency. 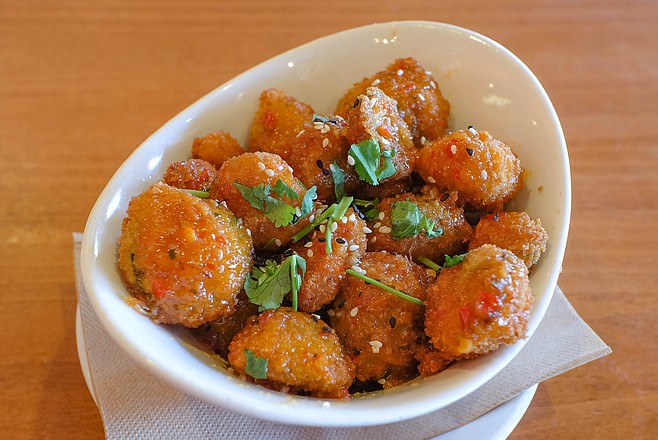 Inside the fried breading are green, leafy vegetables.

There was plenty of transparency to choose from, including salads and several different approaches to dressing up a meatless burger patty (I’ll have to save the cherry chocolate BBQ burger for another occasion). However, being in Rome, I decided to order the most stereotypically Southern California item I could find: the so-called sesame kale macro bowl ($11).

That would be a bowl of steamed brown rice, topped with steamed kale, sauerkraut, and tempeh, and dressed with sesame seeds and tahini. According to critics in flyover country, kale’s the most left coast, liberal elite vegetable there is, so steaming and pairing it with tempeh sounds like the recipe for a culture war. But wait! The Palm Springs-founded Native Foods has four locations in the capital of the Midwest, Chicago. I take comfort knowing that, somewhere, out there, a person full of Italian beef and deep dish pizza is likewise trying to nullify their new year indiscretions with a kale-centric meal.

Most of the dishes at Native Foods are made from scratch, but thanks to that ingredients binder, I learned the tempeh itself is processed by the national brand, Tofurky. The chunky strips of fermented soy bean “meat” don’t come off as fresh next to all that bright green kale, but they’re satisfying to chew upon, and mesh well with the sesame. 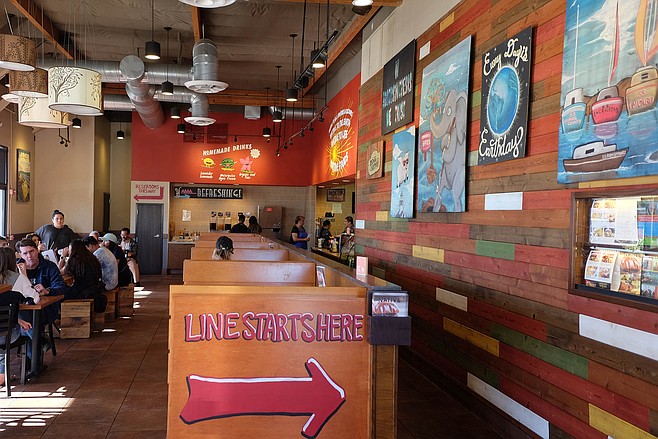 I wouldn’t say the same about the sauerkraut. Though a healthy contributor to any meal, in this case its benefits would seem to match up with kale and tempeh more than its taste. I finished the meal, and felt healthy doing so, but I added lots of sriracha.

I also added a side of fried brussels sprouts, breaded and flavored with a sweet Thai chili sauce. Fried foods were never part of my healthy resolution, but I assume the benefits of cruciferous greens have got to outweigh the nutritional perils associated with fried food. I mean, it’s not possible to eat something unhealthy at a vegan restaurant, right, even if it is fast casual?

That might make a good question for the binder. Native Foods will have to keep working at its vision for a less meat-reliant America before it gains my total trust. However, it’s superior to the average fast food and better than the typical vegan fare.