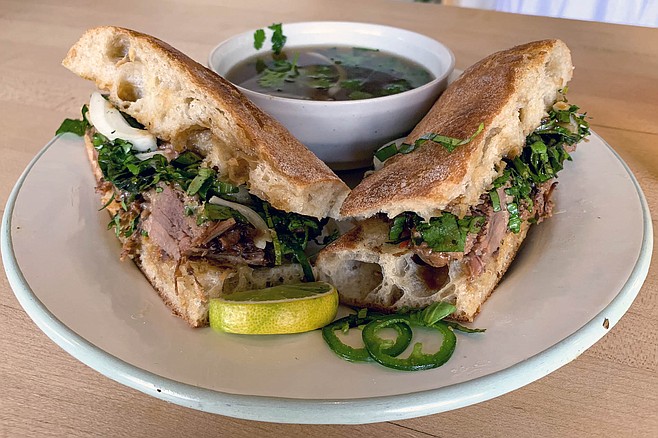 Order anything you want at Enclave, it’s good for you

Trying to eat healthy at restaurants gets exhausting. Depending which internet study you read last, animal fat could be killing you, or vital to your survival. Maybe eating rice daily can extend your life, or maybe it’s just keeping you from eating the more nutrient packed quinoa. And is lettuce even worth glancing at if it’s not romaine? Being conscientious becomes a slippery slope to anxious becomes a slippery slope to ditching all rational thought to gorge on maple bacon donuts and chug mountain dew.

The world would be more ideal if we could just order the thing you crave most, and presume it’s good for you without having to think or ask. Which you kinda can at a spot called Enclave.

The Scripps Ranch restaurant counter launched six months ago inside the tasting room of hard kombucha maker Juneshine. The counter itself is really a large apothecary table, and shelves behind it are filled with large jars filled with herbs and spices. Beside them are trays of live, growing microgreens. The menu is packed with terms such as superfood, and food as medicine. The messaging is clear. But there I see K.F.C wings, which in this case refers to Korean fried chicken.

Wait, can fried chicken wings be healthy? Maybe they can if you source ingredients for nutritional value in addition to taste. Say, pasture raised chicken, from an organic Murrieta farm, which promises chicken lower in fat and higher in nutrients than the factory farmed alternatives. Say, marinated in non-pasteurized local honey, battered with sweet potato starch, and fried in non-GMO rice bran oil. It probably doesn’t hurt they’re served with kimchi turnip, kale, and mint slaw. There are even probiotics in the tamari and chili oil sauce. 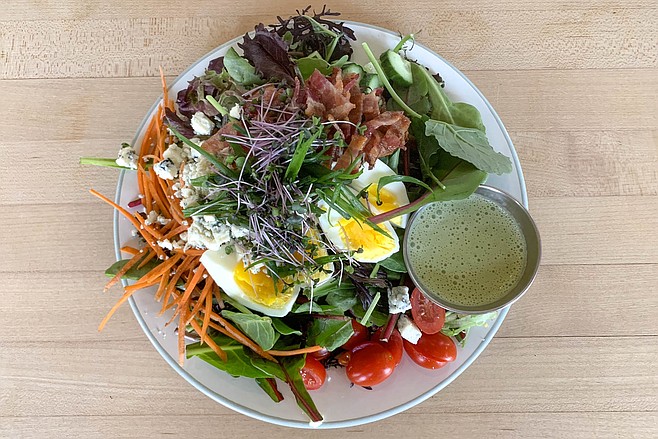 Cobb salad, made super with probiotic herbal dressing and microgreens

Turns out, there are probiotics in every dish at Enclave; not just in the kombucha served at the bar a few feet away. There are fermented pickles in the grass-fed bison tacos. Kimchi snap peas and sesame tamari dressing in the (tuna or beet) poke bowl. In the so-called super cobb salad, they’re in the aged blue cheese and herbal dressing, based in Greek yogurt. There’s nitrate free bacon (or coconut bacon for vegans). There are locally grown microgreens, cut fresh from that tray behind the counter, and included with nearly every dish.

According to chef Lan Thai, a.k.a. chef Lando, the chef behind this menu, these broccoli, kale, kohlrabi, and amaranth sprouts pack 20 or more times the nutrition per volume as their mature counterparts. Whether or not that makes them “super,” it definitely makes them healthy. The broccoli sprouts are especially rich in sulforaphane, a sulphur compound reputed to have anti-carcinogenic and anti-aging benefits. Chef Lando’s background includes several years cooking meals for the chronically ill, where she appraised the impact of ingredients on digestive, cardiovascular, and other bodily systems. She factors in elements of western nutrition, eastern medicine, and folk knowledge passed down by her family, who grew their own food for dozens of generations in Vietnam, until her parents came to the U.S. as refugees, and did so in Lakeside. 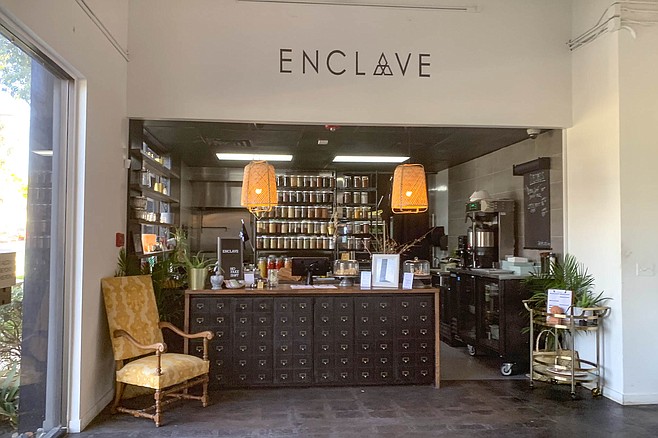 An alchemist food counter at Enclave, inside the Juneshine Hard Kombucha taproom

Lando’s not cooking exclusively for meat eaters, or vegans, or the gluten-free — though all will find what they seek at Enclave. Mainly, it’s about serving tasty food that sneaks in a bunch of healthy ingredients, whether you notice or not. My favorite so far has been the phở dip sandwich. It’s organic and grass-fed braised brisket (sub “medicinal” mushrooms to make it vegan), served on locally baked, Prager Brothers bread, with a shitake mushroom dipping jus, seasoned like phở broth. Topping the sandwich are those microgreens, and loads of Vietnamese coriander and Thai basil, presumably adding nutrients I don’t even need to think about. I can just enjoy the rich broth, savory beef, and herbal aromatics, and assume it’s the healthiest sandwich I’ll eat this month.