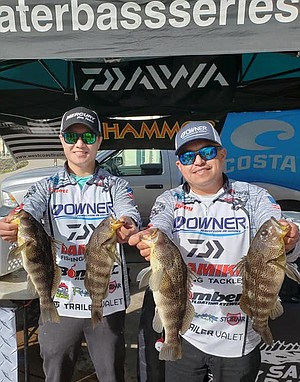 Saltwater: High winds brought a small craft advisory to the area and the San Diego Anglers Open Bay Bass Tournament was cancelled the day before the February 16 event. After having to cancel the event last month (also bad weather), organizers decided to just call it for this year and refund entry fees. Per their Facebook post, they “would usually just award the cash prizes in a random drawing, but the tournament committee felt it was best to refund the entry fees”.

The decision to not hold the tournament was not just due to dangerous conditions on the water in a predicted 25 mile per hour blow; wind affects tents and indemnification.

Considering the investment of time and money that goes into organizing such an event, holding a drawing to disperse the prizes might have been the better option for the club. The event permit, reserved tent, insurance, food, supplies, entry forms, t-shirts, and all the other costs associated still had to be paid – to the tune of $30,000.

On the other bay, the Saltwater Bass Series held its tournament. Their tent held up, and the anglers caught fish in a choppy Mission Bay. Instead of the planned tournament boundary lines outside the bay from Crystal Pier to the Mexico border, organizers kept competitors inside the bay. They felt that it would be better to target spotted bay bass only.

Because of less fetch, or distance for a wave to build, the wind waves on Mission Bay were smaller than those on San Diego Bay,. Anglers were able to post up some nice catches of spotted bay bass. Forty-seven teams showed up.

Tournament winners Bobby Martinez and Garrett Ching took home a check for $1,845 with a five fish limit totaling 8.10 pounds. Martinez: “We fished docks in 15 to 20 feet of water with Owner block heads paired with a Damiki 3-inch Armor Shad on Daiwa J-Braid x8 line. I believe the only difference we did was to slow down our presentation as we saw our fellow competitors power fishing."