Fishing off the three Californias

From Bahia Tortugas to Channel Islands 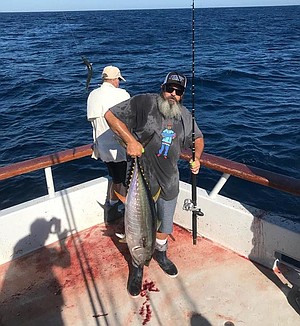 Kevin Abshear with yellowfin tuna caught aboard the Independence off Baja

Saltwater: The Searcher is doing its thing and searching along the Baja coast near Bahia Tortugas as dawn breaks on the anniversary of the Grito de Dolores. Some multiday boats fishing the Mexican coast will see fireworks, and those aboard the Searcher will see a few over the small village of Bahia Asunción, about 400 sailing miles or 600 driving miles from San Diego.

The Independence has been working the Baja coast, their last seven-day trip sliding south along the ridge for yellowfin tuna and a few wahoo before the breeze came up and they moved in shallow for calico. They boated white seabass and yellowtail while inside. It’s much the same fishing along part of the three Californias – Southern California, Baja California, and the northern half of Baja California Sur – for tuna and yellowtail. There are more skipjack off the San Diego coast to just south of San Quintin, but the yellowfin are on or around any high spot one can think of.

A good part of the overnight to two-day fleet is fishing southwest of the Coronado Islands near the 425 and 371, though most of the banks in the area are holding some fish. Dorado continue to cruise under kelp or are ranging to the outside of the tuna when they are feeding, and when found, they are eating whatever falls in front of them. Bait, sardines, has been the hot ticket for most of the tunas when up, though Flat-Falls, Colt Snipers and Salas 6x have been working on them when deeper, or just plopped through the fray on a hot bite.

Most of that bluefin tuna action is around the San Clemente Island area out to Cortez and Tanner banks. Due to afternoon breezes, that area can get lumpy, and targeting those big fish entails a lot of time watching while only a couple kites can be flown at a time.

Inshore, the surf fishing has been good for perch, corbina and croaker, while out under the kelp canopy, calico bass and sheephead are biting. Sculpin, too, but they are out of season and must be released in U.S. waters. A little bit off the kelp edge, yellowtail, bonito and barracuda are all cooperating some days, not so much on others, but fishing is good overall. There haven’t been a lot of white seabass this year in La Jolla, but an occasional grey ghost is caught; Oceanside boats seem to have a few in the counts every week. Boats north at the Channel Islands are doing well on the big croakers.