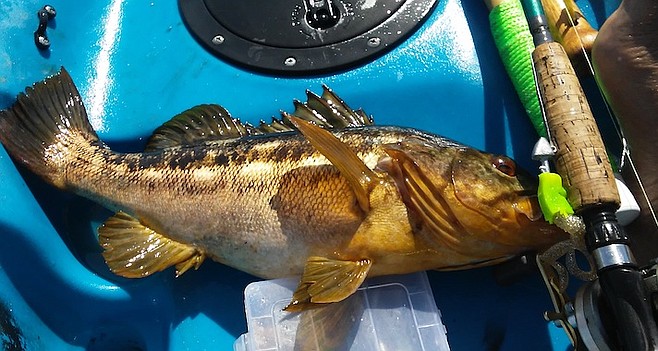 Saltwater: The third edition of the Baja Catch was printed in 1997. Some of the prices quoted for campgrounds or motels have changed, but most of that book is still relevant. I dog-eared my last copy for 15 years before finally giving it away to a friend that was adventuring into Baja to fish for the first time, but I remembered a section on the southernmost area where calico bass are found – the stretch from Bahia Tortugas to just north of Bahia Magdalena called the Pacific Transition Zone. This is the area where the fisheries change from kelp forests of the cool Pacific to tropical waters that extend to the other side of the equator.

Though I have travelled to Baja many times and have lived there on and off, this past couple weeks was the first time I visited that area by road and fished from a kayak. I found a little spot in Bahia Asuncion that was affordable – Shari Bondy and Juan Arce’s Sunset Casita. The house is a small one-bedroom with an ocean view looking southwest over a launchable cove just a couple hundred yards away. The view driving in after sixty some odd miles from the turnoff at Vizcaino was spectacular, but the first thing that really impressed me about the little village of Asunción as I made my way through town was the apparent lack of burglar bars.

After arriving and settling in the first evening, I heard sea lions in the distance to the south. In the morning, I toted the kayak down to the cove and paddled out with a couple rods and a handful of plastics and a couple surface irons. The bass fishing was off the hook. Every calico I caught was over the California minimum of fourteen inches and several were over five pounds.

I even caught a small yellowtail in the shallows on a swimbait while targeting bass. I took the kayak out several times while there and metered several reefs, tried several different lures and the results concerning calico bass were the same every time. Big fish, and lots of them.

Some folks will say, "Don’t give out the spot, the people will come in droves and ruin it’. Well, it’s been a few decades since Neil and Gene wrote about the insane calico fishing in the area and the droves still haven’t come. Until recently, the road in was a washboard tooth-clatterer for the seventy-mile trip. Now, though paved, it is not rare to see only one or two vehicles. One note, though, if you make the nearly 600-mile trip from San Diego, watch the dunes that drift across near the Bahia Tortugas/ Bahia Asunción junction.

Along with fishing, Shari Bondy and Juan Arce charter tours to the whale calving grounds through the winter season.

Fish Plants: None this week