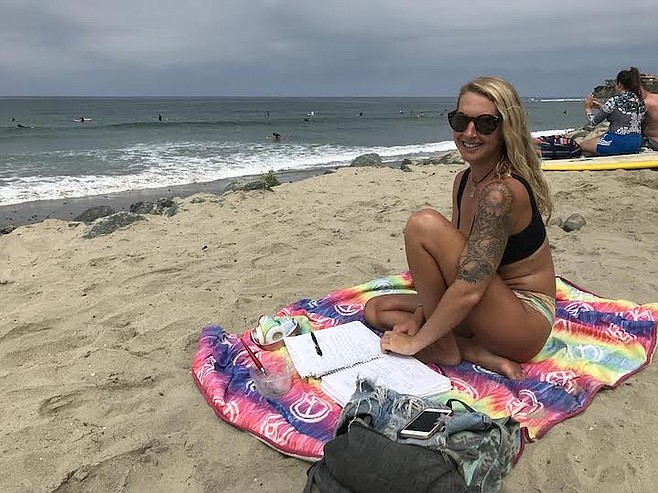 My friends thought I was knocked out

On a sunny day in Pacific Beach, Alex Geller was sitting in the sand. “I’m from Colorado but I’ve lived here for the last eight years.” As a kid, Geller would visit her grandparents in La Jolla and try to teach herself how to surf. “I packed up my Volvo to move out here to surf and I’ve surfed almost everyday since. I used to suffer from really bad panic attacks and surfing helped me deal with that.”

Geller told me about her biggest wipeout: “I was out there at South Bird Rock on an eight foot day with all my guy friends. They cheered me on as I was perfectly lined up for a wave. Suddenly I realized how steep it was, so I panicked and tried to back out, but the front of my board was already in it and took me over the falls. I could see the reef by my face and it felt like I was underwater for a minute— it was probably only ten seconds. When I came up I was kind of laughing at myself. My friends were so surprised because they thought that I had definitely gotten knocked out. It was pretty scary.”