Bonito for dinner? Smoke some. 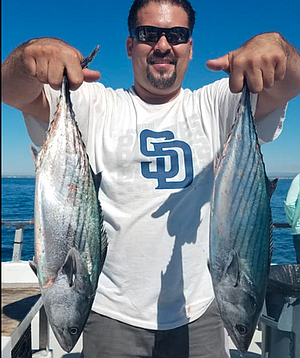 Saltwater: The fish continue biting into November, even as the angler count fell off for the San Diego fleet this past week. Overall, the tuna counts remained about the same per angler, except for the bluefin tuna out at Tanner Bank doubling in the count and nearly doubling in average size. There have been more caught in the 100-250 pound class which is keeping a handful of boats aimed at the grounds to the southwest of San Clemente Island. Despite the good mix of yellowfin, skipjack and dorado down south, most vessels targeting bluefin will keep running out there as long as the fish are there.

Closer to home, the daily fleet has been doing sporadically well on yellowtail off the Coronado Islands, when the fish are biting; they are eating everything from surface irons and fly-lined bait on top, and yoyo irons and flat-falls worked down deep. Bonito, rockfish, calico bass, and sheephead have been rounding out the counts at the islands and continue to be the most represented species in the half-day counts from Oceanside to Imperial Beach. Bonito continue to range along the coastal high spots while a little further out, smaller skipjack have been caught near Nine Mile Bank.

It will be interesting to see how much longer the surface action will hold this year before the local fleet transitions into primarily targeting groundfish, when reds, lings, sheephead and whitefish represent the bulk of the count for the ½ and ¾ day boats.

With all that bonito swimming around, requests, recipes, and advice for dealing with them are often posted on social media fishing sites. Bonito is a red-meat fish and can spoil quickly. It is best to bleed and ice the fish as soon as possible, and to handle the flesh carefully as it bruises easily. A good bonito fillet for any recipe will have a firm consistency, a fillet that has turned mushy will only be good for bait. Usually, the scale-less skin is left on the fillet at least until preparation.

Popular methods for cooking bonito are canning, where it can turn out a lot like lesser-quality tunas – decent for salads and sandwiches. Another way is fried in oil as is, skin side down. Fresh, well-handled bonito flesh is used to make poke and can be good as sashimi.

My favorite way to prepare bonito is on the smoker. When preparing bonito for the smoker it is important not to leave the fillets in the brine too long, only a few hours is needed. It can go mushy. I do a maximum of about six hours in a typical brown sugar and soy sauce brine, and make sure it is covered in an airtight container and kept at about 36 degrees while soaking until the smoker is hot and ready.