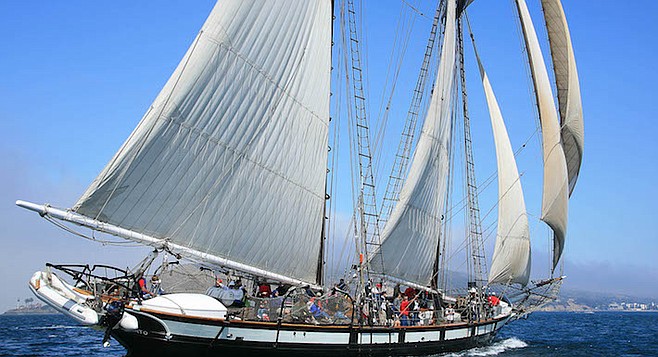 Let's hope she doesn't run aground

Her length, including bowsprit, is 145 feet, though when considering just her hull at 130 feet by 24 feet, the Californian, a replica of the mid-nineteenth century Revenue Cutter C.W. Lawrence, weighs in at one ton per foot. Built from the ground up at Spanish Landing and completed in time to be exhibited at the 1984 summer Olympics in Los Angeles, the tall ship has sailed the West Coast, to Hawaii, and to the East Eoast.

Built in Washington D.C. in 1848, the C.W. Lawrence was launched and sent to San Francisco by way of Cape Horn to patrol the coast of a newly acquired California.. The trip took over eleven months before the Lawrence arrived in San Francisco Bay and began working under the Revenue Cutter Service. The ship was responsible for “enforcing customs regulations, assisting in the rescue of some ships, and the quelling of mutiny in others.”

Nearly three years after first entering the water in the nation’s capital, the C.W. Lawrence was abandoned after running aground during a storm at Punta Lobos south of San Francisco in November of 1851.

Side note on the Californian replica: Catherine Bach, who played Daisy Duke of the Dukes of Hazzard TV series from 1979-1985, was used as the model for the replica ship’s carved figurehead of Queen Califia, namesake of California.

The replica was purchased by the Maritime Museum of San Diego in June of 2002, and during the following winter–spring, she was hauled out, refitted and rigged with new sails and mechanical systems and a re-design and re-furbishing of the areas below deck. On Sundays, from 11:30 a.m. – 3:00 p.m., the Maritime Museum of San Diego is offering a three-hour Tall Ship Sailing Adventure aboard the Californian. Passengers will be invited to haul lines, man the helm and watch the crew as they scamper up and down the rigging to set and furl the 7000 square feet of sails. During the sail, crew will relate the history of sailing and exploration in San Diego, tales of whaling and sea otter trade, local sea battles, the art of ship’s gunnery, and life at sea.