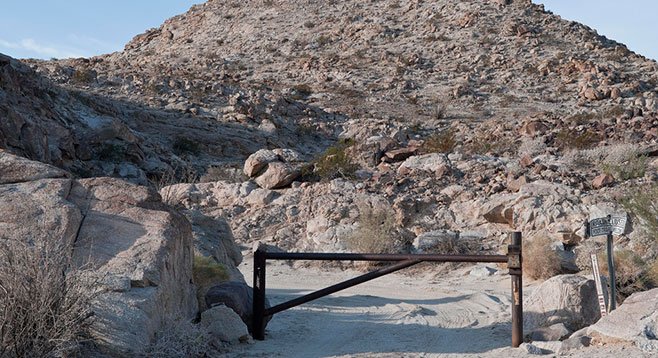 Petroglyphs may not be Cabrillo's San Salvador

The Spanish ship was loaded with pearls when it ran aground in the spring of 1615. The shipwreck lies six miles northwest of present-day El Centro inside an active U.S. naval bombing range. The ship has remained there half-buried in the dunes for 400 years. How did it get there? 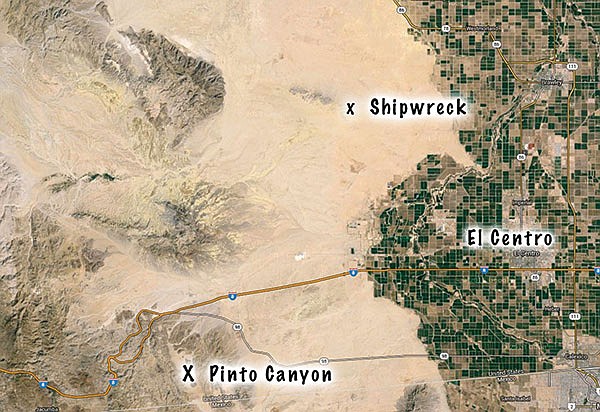 X’s mark the spots of the petroglyphs and the Spanish caravel shipwrecked in what was once an inland sea but now is desert.

In 1610, King Philip of Spain ordered the construction of three ships to be built in Acapulco. They were to be used for the harvesting of pearls along the Pacific coast of Mexico. These vessels, of a type named caravels, would be smaller and more maneuverable than the 200-ton galleons that had transported the first conquistadors from Cuba to Veracruz. The caravels would have a shallow draft, square sails, and 13 rows of oars on each side, which would allow them to navigate easily in shallow water, regardless of wind direction.

The ships were completed in 1612 and they immediately set sail under the command of captains Alvarez de Cordone, Pedro de Rosales, and Juan de Iturbe. Between them they had 40 experienced pearl divers who were slaves brought over from the Portuguese colony of Sierra Leone in West Africa.

It was no accident that the ships were heading north. Nearly 80 years earlier, Hernán Cortés had sailed up to the tip of Baja and found that Bahia de La Paz was loaded with oysters that produced perfectly shaped pearls. At the time, pearls were in great demand and were even more valuable than gold. But the Spanish were unable to establish a permanent settlement in La Paz because of the large numbers of hostile natives and a lack of fresh food and water.

So, the ships led by Captain Cordone passed La Paz but traded for pearls at other coastal villages along the coast of Baja. However, at one village things went awry. When Cordone promised to trade a basket of clothing for a basket of pearls, the native chief was surprised to find his basket filled with worm-eaten cloth. The chief had expected clothing like that worn by the officers. The angered chief shot Cordone in the chest with an arrow. While he wasn’t killed, the captain was forced to return to Acapulco for medical treatment. He ordered his two fellow captains to sail their ships further up the Sea of Cortez.

At present-day Mulege, the men hit the jackpot. A big storm had washed thousands of oysters up onto the beach and men quickly filled their baskets. But upon their departure, Captain Rosales’s caravel struck a reef and began to take on water. Captain Iturbe brought his ship alongside the sinking vessel and moved its cargo and crew into his own.

Now Iturbe had a decision to make: return to Acapulco early or continue north and load up with even more pearls? He chose the latter. For a week he sailed farther north until his ship entered a large estuary. Gradually the route narrowed and then opened up into what he described as a great “inland sea.” This would have been the ancient Lake Cahuilla, today’s much smaller Salton Sea. The captain sailed along the eastern edge of the inland sea and continued up the Colorado River nearly 100 miles to the site of modern day Blythe (where Interstate 10 crosses the Colorado).

It was here that Iturbe decided to turn around. He sailed back down the river and across the great inland sea. But in the weeks since their arrival the water level had fallen tremendously. A miles-long continuous ring of sand bars blocked their exit. They were trapped and Iturbe and his men circled around the inland sea for three days until their ship ran aground. The crew gathered as much of their cargo as they could carry and then they abandoned the ship.

Most of them survived the long and miserable walk back to the Spanish settlement of Guaymas, and a few months later they were transported back to Acapulco on a Spanish galleon. However, their ship and the majority of its cargo of pearls were to remain forever stuck on the edge of the great inland sea, covered by sand dunes.

Nearly 400 years later, in June of 2009, the San Diego Reader published a story I wrote, titled “Stay Away from Pinto Canyon.” The story was about a trek a friend and I made to a remote canyon in order to photograph petroglyphs — prehistoric rock paintings. The petroglyphs were not what we expected. There were no wooly mammoths or saber-toothed cats. Instead we found a crude collection of stick figures, next to what looked like a large sailing vessel with square sails and oars protruding from it. I wrote that the artist “could’ve spent time at Mission Alcalá in San Diego and may have seen a Spanish supply ship sitting in the harbor”. 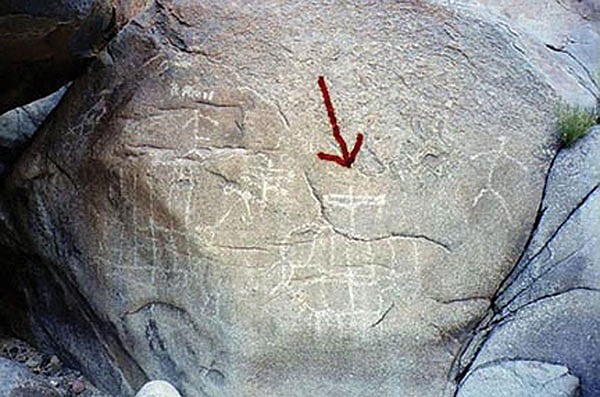 These petroglyphs depict a Spanish sailing ship. Exactly which ship is a matter of debate.

When the folks at the Maritime Museum of San Diego read that, they were “electrified.” Maggie Platt, an exhibit designer at the museum, called and asked if I would lead a group back to the petroglyph site so they could see it for themselves. A few days later I met Maggie and her husband Ted at the Texaco gas station in Ocotillo, about a hundred miles east of San Diego. Using an old map, I’d found a jeep road that would take us from Ocotillo into Davies Valley and bring us within two miles of Pinto Canyon. We set off in a pair of off-road vehicles but in less than an hour we had to stop. The Bureau of Land Management had erected a big steel barrier across the dirt road to stop drug-runners who’d been using the same route. We had no choice but to turn around and go home.

But a steel barrier was not going to deter the folks at the Maritime Museum. Through proper channels they requested and obtained the combined assistance of the U.S. Bureau of Land Management, U.S. Customs and Border Patrol, and the National Park Service. Using their resources, Ray Ashley, the museum’s president, assembled a team of archaeologists, historians, historic site managers, and photographers. Just a few weeks later this team returned to Pinto Canyon — with the protection of armed federal agents.

After viewing the petroglyphs in person and analyzing his data afterward, one of the experts concluded that, while there was no solid proof, the ships depicted in the rock carvings could be from “the expedition of Francisco Ulloa in 1539, the expedition of Sebastian Vizcaino in 1602, or the expedition of Juan Rodriguez Cabrillo in 1542.” He followed with a sensational proposition: “If the objects in the petroglyphs are indeed Spanish ships from one of the earlier expeditions, then it constitutes the earliest primary-source graphic representation of a historic event in American history.”

At San Diego’s Spanish Landing, the Maritime Museum is putting the final touches on a full-sized, fully functional, and historically accurate replica of Juan Rodriguez Cabrillo’s flagship, San Salvador. Not far from the galleon, museum officials have placed a replica of the petroglyph that I found in Pinto Canyon. 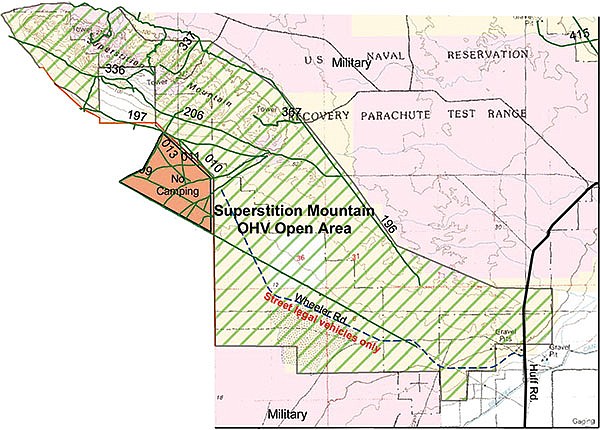 This map shows the Superstition Mountain off-road vehicle area and the Navy bombing range that includes the shipwreck site.

But it’s just as likely that the petroglyph represents Juan de Iturbe’s doomed pearl ship, which ran aground just six miles from Pinto Canyon. Most of the people who’ve seen the remains of Iturbe’s ship were riding in off-road vehicles. One of them, Imperial Valley resident Ed Barff, provided me with a precise location. He says the caravel lies three hundred feet southeast of the eastern-most edge of the Superstition Mountains. Much of that area is designated for off-road vehicle use. But the ship’s remains are located in a section reserved as a bombing range under the jurisdiction of Naval Air Facility El Centro. 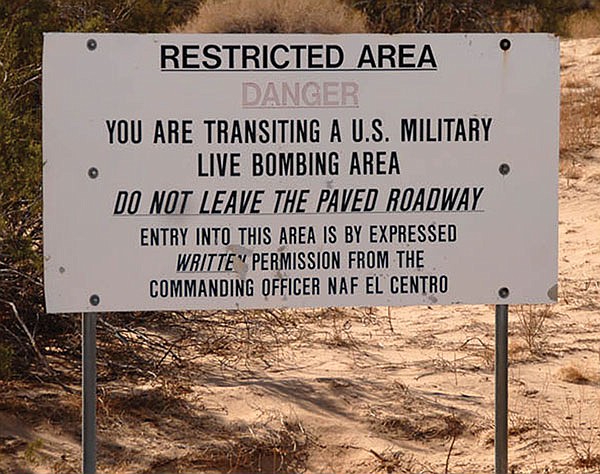 Neither the commander nor the public affairs officer at the air facility responded to my inquiries. But the title of a recent article in the Imperial Valley Press makes the position of the U.S. Navy perfectly clear: “Navy Says Stay Away From Bombing Range.”

The possibility of a ship must be explored. I liked the idea of Maritime Museum putting together an expedition. Start with our Congresspersons. Outdoor writer Ernie Cowan (UT) was part of a expedition a few years ago into the Chorizo Gorge bombing range

Ken, Ken, Ken, that's "Carrizo" Gorge, or in the older spelling "Carriso" Gorge. Neither is spelled, nor pronounced, the way you spelled it.

As I read this tale, I kept waiting for the total satire to show through. The notion that there was a huge body of water in the area of today's Salton Sea (Salton Sink in the 19th century) came across as ridiculous. Maybe near the end of the Ice Age, but as recently as the 1600's--no way! But then I read an authoritative piece in Wikipedia that says that, indeed, the ancient Lake Cahuilla was in fact at a high level in that time frame. The cause is attributed to shifts in the course of the Colorado River. So, this does seem plausible, if improbable.

One thing is certain, though, and that is the seamanship and judgment of those three ship "captains" was sorely wanting.

THIS IS NOT A JOKE, NOR IS IT A PARODY. YOUR DELIBERATELY OFFENSIVE BANTER AND YOUR TRIVIAL SARCASM ARE UNWELCOMED, AND ANTI ITELLECTUALISM IS SERIOSLY INAPPROPRIATE. GIVEN THE SCIENTIFIC NATURE OF THIS DISCUSSION AND THE GRAVITY OF THE NATURE OF THIS RESEARCH I WOULD BE WELL WITHIN MY RIGHTS TO ACCUSE YOU OF SUPRESSING ARCHEAEOLOGY AND ANTAGONIZING RESPECTABLE SCIENCE BY PROMOTING ANTIQUARIAN IDEOLOGY AND ATTACKING REPUTABLE SOURCES.