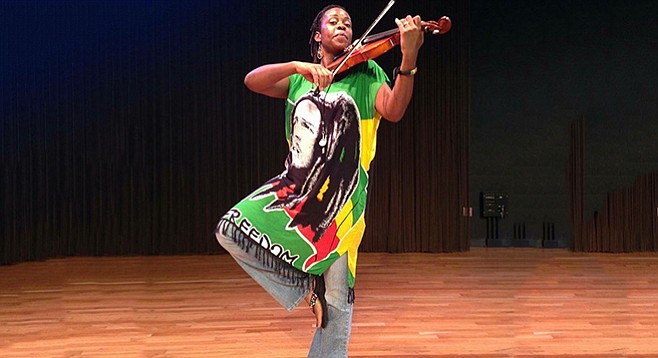 "I saw the effect he had on so many young people."

Day doesn’t stop at 3 pm. Tamara Hartfield Paige has taught music for 17 years, and has influenced the trajectories of many students who have gone on to professional careers, including Charles and Danny Weller, Tim “Figg” Newton, and Chaz Cabrera. She credits her own teachers for the inspiration.

“Dale Saare put a violin in my hands, and then I met Joe Shaara. He had a motorhome that he took to all the elementary schools giving lessons. Every week he would bring me a different instrument, so I learned clarinet and flute as well. By the time I got to junior high school, I studied under Gary Withem, who had played a bunch of instruments with the group Gary Pucket & the Union Gap. We didn’t know he was a pop star in the '60s, he was just Mr. Withem. He got me started playing trumpet, and I wanted to be just like him, because I saw the effect he had on so many young people.”

After high school, Paige went to Redlands University and majored in jazz trumpet, but switched instruments (back to violin) and schools to finish her studies at Arizona State. She returned to the South Bay to direct the marching band for two years, moved to the School of Creative and Performing Arts for ten more, then to Francis Parker, before landing at the Academy of Our Lady of Peace. She’s always seeking a challenge.

How does she approach teaching music? “I reach them where they are,” says Paige. “I feel that I have this ability to connect with students where there is a mutual trust. I think my love for music rubs off on them. The students know that I care about them, beyond the classroom. I’m the kind of teacher who will pick kids up, take them home, and show up for their birthdays. I have former students in their 20s or 30s that I still work with.”

“The best part about teaching music is when you help someone realize in themselves what is possible. Seeing people succeed is very gratifying. My biggest challenge is managing time – my day doesn’t stop at 3 o’ clock, it stays with you all the time.”