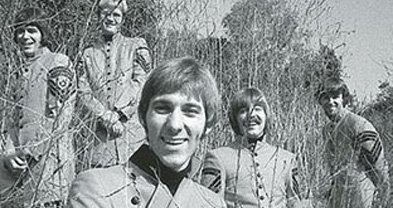 RIYL: The Righteous Brothers, the Association

Influences: The Beatles, the Dave Clark 5, Herman's Hermits, the Association, the Monkees, the Cascades, Righteous Brothers, the Beach Boys, Sandi and the Accents, the Misfits (San Diego band)

Gary Puckett (born October 17, 1942, in Hibbing, Minnesota) grew up in Yakima, Washington, and Twin Falls, Idaho, attending Twin Falls High School while his musician parents toured with Dick Halverson's big band. After relocating to San Diego, he lived on Batista Street in Kearny Mesa and attended college locally for a couple of years before deciding to pursue a full-time music career.

It was while fronting a rhythm-and-blues band called the Ravens that he began working with drummer Paul Wheatbread, who took off for awhile to play with groups like the Hard Times before co-founding a new band with Puckett. With his group the Outcasts, Puckett recorded a song demo that he sent to songwriter/producer Jerry Fuller, who then saw the band perform at a bowling alley and got them signed to Columbia Records. By that time, Wheatbread was aboard and they were calling themselves the Union Gap and wearing mock Civil War-era Union Army uniforms, having debuted in the basement of the Sheraton Hotel at a venue then called Otto's Grotto.

Their first hit was the 1967 single "Woman, Woman" (reaching #4 on the Billboard Hot 100), which was followed during the next two years by "Young Girl" (#2), "Lady Willpower" (#2), "Over You" (#7), "Don't Give in to Him" (#15), and "This Girl Is a Woman Now" (#9). Although the band never had a #1 record in the U.S., "Young Girl" reached #1 on the U.K. singles chart. Controversial at the time, it tells the tale of a man trying to resist seduction by an underage girl who has "all the charms of a woman." Dramatically delivered in Puckett's trademark rich tenor and with a memorable string and brass arrangement, the song was an instant classic and is still much played on radio today.

In addition to lead singer Puckett, the original members of the Union Gap included Dwight Bement (keyboards and saxophones), Paul Wheatbread (drums), and Gary "Mutha" Withem (woodwinds and keyboards), and Kerry Chater (electric bass and rhythm guitar), who played in an early version of Iron Butterfly.

Puckett's powerful voice and the skills of producer-songwriter Jerry Fuller made this band one of the most familiar sounds on the radio during this period. In addition, many of their songs were loosely linked by a common theme of female empowerment, which was unusual for the era and genre. Another characteristic of the Union Gap that distinguishes it from its contemporaries was the band's (at the time) risqué lyrics.

Although the Union Gap was disbanded in 1971, Puckett has had modest success as a solo artist, mostly performing and rerecording the band's classic songs. He has also released some new material, including a 2001 holiday album entitled At Christmas.