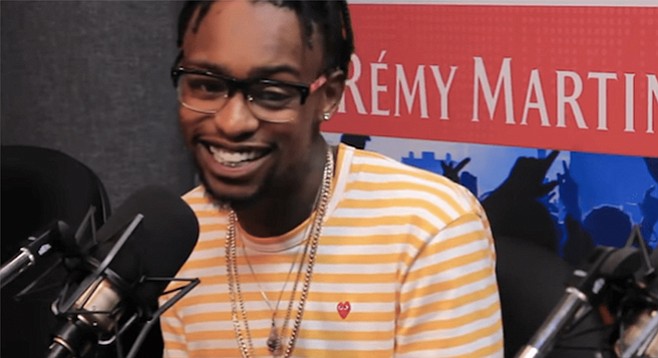 Rob Stone — the guy with the glasses? — did it?

No, he says, on XXXtentacion assault, but "I knew it was gonna happen."

The battle waged on social media caused Stone to get kicked off the three-day Rolling Loud Festival in Miami last month. “The festival has decided that the safest course of action is to remove Rob Stone...from the lineup in order to maintain a safe concert experience,” XXL magazine reported.

“I’m from San Diego, [so] of course I knew it was gonna happen,” Stone said in the interview. “But I didn’t know where it was coming from.”

The Observatory show was cut short and police reported a stabbing occurred.

“We are working around the clock with our management team alongside the San Diego Police Department to conduct a full investigation of the matter,” says Observatory general manager Paris Landen.

She says no decisions have been made about canceling future hip-hop shows at the venue; however, XXXTentacion’s show was canceled the next night at the Santa Ana Observatory.

Stone maintains that a “Fuck Rob Stone” audience chant that erupted immediately after the assault came from people who were not “real San Diego.”

On his Local 949 show four nights later, host Timothy Joseph pointed out what he thought was the biggest fail from that night: “[XXXTentacion] gets knocked to the ground and his vocals are still going. The whole thing was prerecorded, including his vocals. Are you kidding me? It’s a travesty that people are getting duped by someone lip-syncing. If you have the microphone don’t give me any Milli Vanilli crap.”