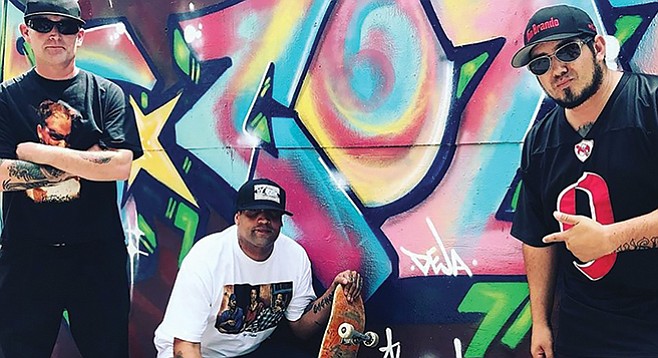 “We’re like the Beastie Boys plus mushrooms times alien”

Five years ago, rapper Van Brando (born Brandon Van Eklenberg) was driven by anger. His lyrics told how his imprisoned father “fucked up his family” and how that pent-up anger led to his going to jail a couple times (including once for assaulting an officer). He was known for spewing lines about his plight and about lazy local rappers who only cared to mimic radio hits. "You call yourself a rapper/More like a borderline slacker."

Things are different now. “My dad just got out [of prison],” says Van Brando by phone from the DMV parking lot while waiting for his dad to get his first legal ID in years. Son is now helping out dad with a place to stay. “When he got out, he didn’t have anyone to help him. I feel good about how he has changed.”

And Van Brando admits he has changed too. “I got married and I have a daughter now. I still get angry when I need to, but I’m more like the Hulk controlled.”

But now, instead of bitching about the uninspired local scene in rhyme, he’s helped to create something entirely different. It’s a collective called Cult Muzic including three different rappers, a comic, a lively stage show, and a producer who creates genre hopping instrumental tracks.

Black Hesher says producer Rick Rubin inspired him to put together Ichabod Cranium, released this week. “It’s a free download of 20 Halloween songs with a bunch of different local artists and people from out of town.”

Hesher says local performers sometimes forget that every show should be full-tilt. “I had to go the hospital for knee surgery because I fell off the stage at a show in Lemon Grove. We can play in front of any type of crowd.”

The three rappers were part of a touring package brought together by a local manager/agent who understood the value of a multi-dimensional hip hop revue, but who didn’t seem to get along with the talent he assembled.

The artists parted company with the manager but kept the format. “He was good at booking shows but bad at managing acts,” explains Black Hesher.

Regarding the local hip-hop scene: “It’s whack” says Black Hesher. “There is a lot of talent but no unifying scene.” He says it was different back home in Boston. “People in the scene out here don’t want to see others being successful… it seems like it’s based on a lot of mumble rap which to me is so fucking boring.”

Comic Tommy Lucero emcees the lively Cult Muzic stage shows. He says it serves as an antidote to the late XXXTentacion, who was caught lip synching to his own music after he was knocked to the ground at his fateful House of Blues show last year. “Who wants to go see karaoke for $50 a pop?” asks Lucero. “When I saw these guys open for Kottonmouth Kings and I saw the three different styles intertwined, it was like the six lion robots coming together for [’80s cartoon] Voltron.”