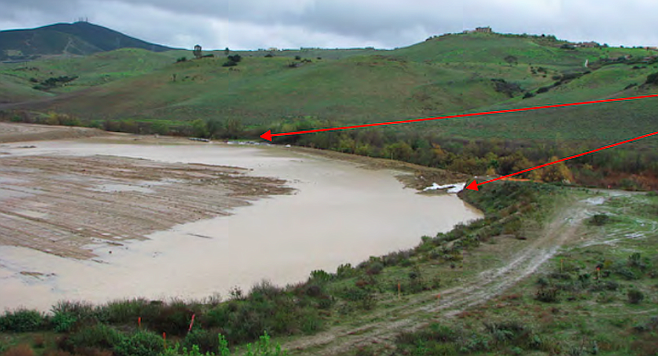 More reasons why city will pay for water projects

Half of a $3.2 million fine levied against San Diego for city construction inspectors’ past failure to require efforts to keep construction sediment out of storm drains will go to restoration efforts at Los Peñasquitos, Chollas Creek and San Diego River, according to settlement documents.

The water board investigation arose out of a private citizen’s report in May 2015 that a city inspector was allowing a city contractor to let mud run down Trumbull Street in Point Loma — with the mud ending up in a storm drain. The contractor was replacing concrete pavement on the hill above Shelter Island.

According to water board documents, its inspectors found the report to be true, and sent inspectors to look at multiple projects where city inspectors were supposed to make sure city contractors follow the rules that require the best possible effort to keep filth out of the storm water system.

As those pervasive storm drain stencils say, what goes in there goes straight to the bay and the ocean.

“Further investigation revealed that City inspectors were performing inspections and finding storm water BMPs to be adequate whereas San Diego Water Board inspectors observed no BMPs at all at the same sites,” the report says. (Emphasis added.)

Water board inspectors found violations at nearly a dozen locations, from the Jacobs Center for Innovation to a 30-acre Del Sur development, where city inspectors signed off on storm water control practices that were either inadequate or nonexistent, according to water board documents.

Contractors working on the city’s Poway Bike Path project, for example, left large piles of dirt uncontrolled where they could be easily washed into Los Peñasquitos Lagoon, according to the documents. The project hadn’t been enrolled in the construction program for storm water controls, the documents note.

Water board investigators found a 30-acre construction site being developed by Black Mountain Ranch LLC at Del Sur, west of the 15, that hadn’t adequately protected against the run-off that ended up in Lusardi Creek. The city denied knowing that the site wasn’t complying. In Torrey Hills, investigators found more violations that the city hadn’t written up. An eight-acre site for the estates at Costa del Mar similarly was found to be in violation after city inspectors had signed off on the site’s storm water plans. A 2,200 unit apartment complex called Casa Mira View, on 41 acres, was fined $286,000 over its failure to follow storm water rules.

The discovery that the city wasn’t following or enforcing storm water rules prompted an audit of two city departments, Development Services and Public Works, which are responsible for storm water compliance on city and private projects. The audit revealed that there weren’t enough inspectors and resources to make sure the city and its contractors were following rules the city had agreed to and that the city requires everyone else to follow, according to water board reports.

A city spokesman said that, as the city's letter indicates, the departments are taking the matter seriously but they don't comment on enforcement matters that are not yet resolved.

Chiarra Clemente, a senior environmental scientist at the water board, says that cities can end up not following the rules as a result of things like budget cuts, where fewer inspectors have to do more work as the number of inspectors is cut to save money.

“The (settlement) agreement carves out specific staff for storm water inspections so they won’t have the problem of inspectors whose responsibilities are overwhelming,” Clemente said. “All the departments involved had communication problems – when there are multiple departments overseeing inspections, it’s not unusual to see that.”

She explained the thinking behind how fines are calculated includes making sure the violator didn’t profit from ignoring widely known and understood construction rules. Contractors and developers can save a lot of money by ignoring storm water management, according to Clemente .

“Implementing best management practices is expensive, and some people see the fines as just the cost of doing business,” she said. “But that is unfair to competitors who are complying, and it doesn’t get them to compliance. So we try to set fines that negate any economic benefit they may have gotten from cutting corners.”

The Regional Water Quality Control Board is expected to approve a settlement with the city on August 9.

Water board staff originally looked at a $4.6 million fine, but reduced it to the $3.2 million in negotiations with the city.

In enforcement cases, the fines normally go to water board fund in Sacramento, not to the local office, executive director David Gibson has said.

So the water board staff negotiated a fine, with $1.6 million guaranteed to projects in the city of San Diego that constantly struggle for funding.