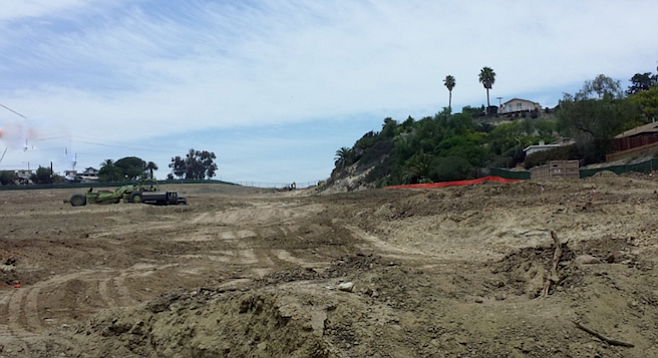 The state water-control board socked the builders of the Valencia Hills project in Lemon Grove with a $603,232 fine Wednesday (August 10) for letting grading waste spill into Chollas Creek.

The Regional Water Quality Control Board opened the prosecution in October 2015 at the request of inspectors from the City of Lemon Grove, who had tried to bring the project into compliance with strict rules aimed at preventing run-off that would travel to Chollas Creek and spill into the San Diego Bay.

Homes in Valencia Hills, a 73-home project built on 18.23 acres north of Imperial Avenue and east of 69th street, cost $400,000 and up and are all sold, according to the company's website. (On the website, the project is said to be 82 homes; on the initial filings it's listed at 78 homes; and in legal briefs, it's said to have 73 homes.)

The project was developed by a limited liability corporation, San Altos-Lemon Grove LLC. LLCs are common in development projects because of the liability limits.

Scot Simpson, one of three key partners in the project, is the past president of the local Building Industry Association. Simpson and the project's attorneys at Opper & Varco did not respond to requests for comment.

In October 2014, the City of Lemon Grove contacted the water board after its attempt to bring the project's grading work into compliance with stormwater run-off regulations had failed — despite administrative citations and stop-work orders. The regulations have been in place since September 2009, according to city records.

Despite dozens of inspections by city and water-board inspectors, the project continued to not use industry-accepted methods to keep sediment out of the abutting Encanto Channel, according to water-board documents. At least twice, sediment-laden water spilled into the channel, which connects to Chollas Creek.

The prosecution was hard-fought. Lawyers for San Altos deposed several water-board staffers and tried to keep photos from Lemon Grove employees out of evidence. Many of the photos in question resemble those found on the website.

During the prosecution, lawyers for San Altos claimed that 41 of the 136 allegations against the builders were without merit, and that the water board's fine would hurt the industry.

"Imposing a penalty on San Altos that makes San Altos insolvent will discourage future development of such Projects," attorney Wayne Rosenbaum wrote. "A penalty close to $1 million relative to the size of this Project will certainly result in widespread hardship to the service population in that developers who are already wary of the narrow margins associated with the development of affordable housing will likely be even further deterred. As it is, Valencia Hills was the first entry level housing development of significance to be built in Lemon Grove."

But the water board sided with the prosecution, lowering the fine to $603,232 from the original $850,000. Chiara Clemente, an investigator for the water board, called the case a victory for two reasons. First, that a company that allowed sediment to run into the creek was hit with a hefty fine. Secondly, she said, the board's ruling included decisions on the technical aspects of how builders should proceed — for example, how long a pile of dirt can be left during grading before it has to be stabilized.

"It was a success because we also gained clarity on what the board expects," Clemente said. "It lets us reach back to the regulated community to give them more accurate information about what we expect of them."

Maryanne...How does one "Works at Journalist?" First, like most right leaning wingnuts your comments lack any science based facts. The Water Control Board uses actual science based studies to help prevent damage to our watershed systems by ignorant or self-serving citizens. Secondly, The City of Lemon Grove first contacted the Water Control Board in October of 2014 regarding the violations. "Despite dozens of city and water board inspectors, the project continued to not use industry-accepted methods to keep sediment out of the Encanto Channel. The developer clearly did ignore these mandates and now has been punished accordingly.

If you can produce credentials qualifying you as an environmental engineer, hydrologist, or possessing any scientific background your OPINION may have some credibility. Otherwise, you are simply an uninformed troll who "Works at Journalist".

Chollas Creek is one of the most challenged watersheds in the region. So much crap gets dumped in it that it has to be dredged farther downstream to keep from the creek channel from plugging up and overflowing into people's yards. The city of San Diego has spent a fortune undoing the "MUD" jam ups.