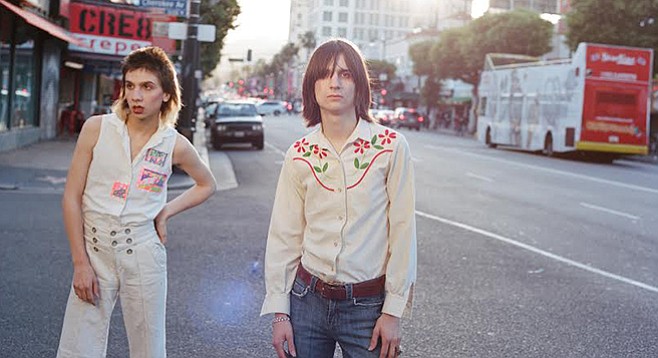 When life hands you Lemon Twigs...

...join the pop-rock fun at Casbah this Thursday

"Queen of My Soul"

The Lemon Twigs sound like a rough cut of the Beatles from way back before the Fab Four had gotten tight from playing all those marathon gigs in Germany. Throw in some Bay City Rollers, a little touch of glam, and maybe some Beach Boys. The Lemon Twigs are in a sense archivists of history, of an era of rock and roll music that is available to them on records (well, downloads) only. Which is not intended as criticism — this is the time-honored way many musicians learn old songs. What the Lemon Twigs do differently (it is likely that this is what their most famous fan, Elton John, saw in them) is that they’ve made their own thing from music-industry remnants, applying fresh energy, as if the past never was, even though it still sounds like the past.

The Lemon Twigs are a new quartet, one that clearly respects the mullet. The band was started by a couple of brothers, now 20 and 18, from Hicksville, a town on Long Island. Brian and Michael D’Addario cover all the bases: they write, sing, drum, and front the band in roles that are interchangeable throughout a typical Lemon Twigs show. Their father, Ronnie D’Addario, plays multiple instruments as well and had a little rock-industry love shine on his own record releases back during the 1970s. The other two Lemon Twigs are Danny Ayala on keys and bassist Megan Zeankowski.

The Lemon Twigs have thus far gained a record deal and are now road-dogging in support of their debut, Do Hollywood. They have played the rock-and-roll mothership, otherwise known as the U.K. The Times and the Guardian have both fawned over the brothers. The Lemon Twigs are sometimes referred to as the most exciting new band on the planet. Yikes. “They’re very cute,” Elton John is reported to have said. “I think they have an amazingly bright future.” We’ll see about that, eh?