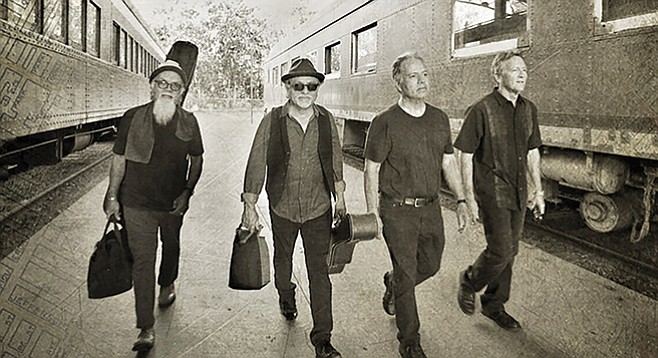 The Delgado Brothers Band came out of the scene that gave us El Chicano, Los Lobos, and Cannibal and the Headhunters

Get a singer with Tommy Castro’s R&B sweetness, and back him with the rhythm section from the old Chambers Brothers band and Freddy King on guitar. A dream band? Sure. But not entirely unreal. This fantasy lineup begins to approach the kinds of sounds the Delgado Brothers Band have been making for nearly 50 years. Call it Latin blues. Born and raised in East Los Angeles, the brothers came out of the scene that gave us El Chicano and the rock and roll/roots band Los Lobos. Also, lest we forget, Cannibal and the Headhunters (“Land of 1,000 Dances”), Los Illegals, and the Ambertones, in which the eldest of the Delgado brothers, Eddie, played bass.

The Delgado Brothers Band is Joe, Bob, and Steve Delgado, with David Kelley on keyboards. Not to be confused with the Delgados, a 1990s-era Scottish indie rock band, the Brothers came of age playing backyard parties and club dates throughout Los Angeles and the San Gabriel Valley. They were discovered at an L.A. show not unlike the Adams Avenue Street fest. The band landed a record deal and got the same producers who molded Robert Cray’s sound into an income stream, but no dice. The Brothers’ debut sold in the small numbers. The label dropped them, and by 1994, the Delgado Brothers Band was quiet.

A friend brought the band out of exile in the late 90s. Soon after, the Brothers recorded their second full-length, Let’s Get Back. Fellow Angeleno John Mayall, by now a superstar, heard the blues in that album. He covered “If I Don’t Get Home” and “Something About My Baby.” This was an affirmation from a bona fide tastemaker, and it was the break the Brothers needed. They’re now touring in support of Two Trains. There’s nothing wrong with being the best East L.A. blues-rock band you’ve never heard of — the Delgado brothers have made a fine career of it.