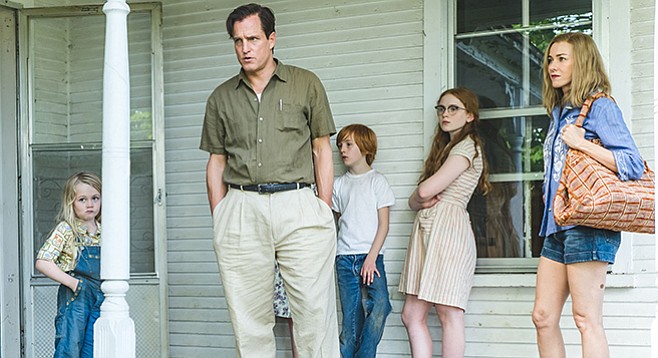 The Glass Castle, by San Diego’s own Destin Daniel Cretton

An old joke came to mind while watching Destin Daniel Cretton’s The Glass Castle. A father and his two young children stand outside a 7-Eleven, asking all who enter to spare a little change. Before parting with a ten-dollar bill, an almsgiver looking for reassurance demands, “This money will go towards feeding your children, not beer and cigarettes.” “Don’t worry,” the father replied. “I got beer and cigarette money.” 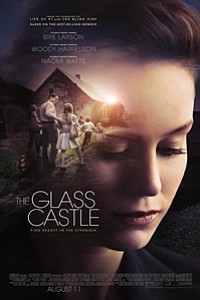 The gag could just as easily apply to Rex Walls (Woody Harrelson), an ornery, in-your-face alcoholic drifter who teams with his equally disenfranchised wife Rose Mary (Naomi Watts) to give negligent parenting their best shot. Rex has the makings of an excellent home-school teacher — dad knows everything from physics and astronomy — but he squanders too much time on teaching the children lessons he’s incapable of learning himself.

The couple, with their four kids in tow, squat their way through life, moving from village to burgh, constantly on the lam from the government. Living far beneath the poverty level, the family miraculously finds ways of keeping its wayfaring household sheltered and fed. Based on former MSNBC gossip reporter Jeannette Walls’s autobiographical best-seller, this is one glass edifice that’s hard to throw stones at.

Who hasn’t been embarrassed by a parent’s behavior at one time or another? Nothing comes close to what this impressionable quartet had to endure. Just when you begin to take Rex and Rose Mary seriously, Jeannette suffers third-degree burns because Mom couldn’t stop painting long enough to boil hot dogs for her, or Dad teaches the kid how to swim in a manner befitting Freddy Krueger.

Oddly enough, the four real-life Walls have grown into free-standing, fully functioning members of society, but some scars will never heal. Guilt and conditioning being what they are, Jeannette’s the type who would feel poor even with a million dollars in the bank. When dining companions don’t finish what’s on their plates, she asks the waiter to doggie-bag the leftovers for her.

This is Brie Larson’s second collaboration with Cretton; the two previously paired on the feature Short Term 12. The trailer made it look like another leading role for the Academy Award-winner, but don’t let it fool you. Larson is joined by talented newcomers Chandler Head and Ella Anderson, and together they take turns playing Jeannette at various stages in her life. Even though the film is told from Larson’s point of view, the Academy Award-winning actress is on screen for less than a third of the picture. Still, not unlike Robert De Niro’s Jimmy Conway in Goodfellas, Larson’s performance is such that her presence is felt in every scene — whether or not she’s onscreen.

Now that Jonathan Demme is gone, there’s not an American director currently at work better equipped with the compassion and cinematic savvy needed to prevent Walls’s memoir from teetering into Lifetime Channel-land. Disclaimer: a decade or so ago I was working the counter of the now defunct Citizen Video in South Park. A lanky, fresh-faced kid stumbled in one Friday night with a copy of Drakmar: A Vassal’s Journey, a documentary that he had just finished shooting.

Destin introduced himself and said, “This is a movie I made. I’m not here to sell it to you. I’ll give you a copy. Rent it and keep the proceeds. I just want people to see it.”

I took it home, watched it that night, and from that day forward did my best to get it in the hands of as many customers as possible. And lest you think I’ve gone all sentimentally starry-eyed over the local boy made good, track down my last interview with Destin where I took him to task for neglecting to use a tripod.

Destin didn’t forget. In response to my email, he closed by pasting the following snippet from our last conversation at the bottom of the letter:

DC: (Laughing): The next one won’t be handheld just for you.

SM: Please. A couple of handheld shots just to piss me off.

There were, and I was. Read the full interview.