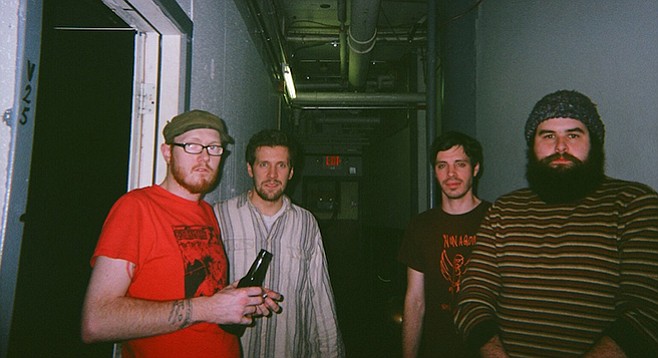 Pile on fast food and the van problem

Rick Maguire started Pile as a solo project in the late 2000s. Legend has it that the name was inspired by the metaphorical pile where Maguire’s rejected songs from his previous band were amassed. Over the past decade the project has slowly morphed into more of a full-band enterprise.

“As far as the operations of the band, it’s stayed pretty much the same,” Maguire explains. “I think the main thing is that we have a little more experience. We don’t have the same desire to get really drunk every night and have the same sort of ambivalence to eating fast food every day. I would hope that we have matured a little bit.”

Maguire says he was listening to the Mars Volta, Bob Dylan, Elliot Smith, and the Beatles when Pile started. This mash-up seems about as good as any to define the varied sound of the band. Its haunting, intricate guitar work, hushed vocals, and subdued verses are juxtaposed with explosive climaxes and howling screams. It sounds like music that Touch and Go would have released in the 1990s. It may seem a tad too heavy for widespread indie-rock radio airplay these days, but Maguire is unfazed.

“It’s sort of easier to just do whatever I feel compelled to do,” he explains. “Maybe, in some regards, it’s a little too heavy, but who’s to say that the pendulum won’t swing the other way and people will be into music that’s way heavier than ours? It’s pretty difficult to trace.”

Maguire studied music (with an emphasis on business) at the University of Massachusetts-Lowell. Even though the band has slogged it out on a very small indie label since he graduated, he feels that the degree did little to help them, since, as he puts it, “I was learning about stuff like, ‘How would you deal with a contract if your music was in an opera?’ There was, like, no risk of that happening to me anytime soon.”

Pile will be making their third appearance in San Diego when they play the Soda Bar. If they’re lucky, a vehicle breakdown will force another impromptu vacation. “The first time we played out there we stayed at a friend’s house and some belt on the van broke as were driving away, so we had to stay in San Diego for an extra couple of days — and it was the best!”