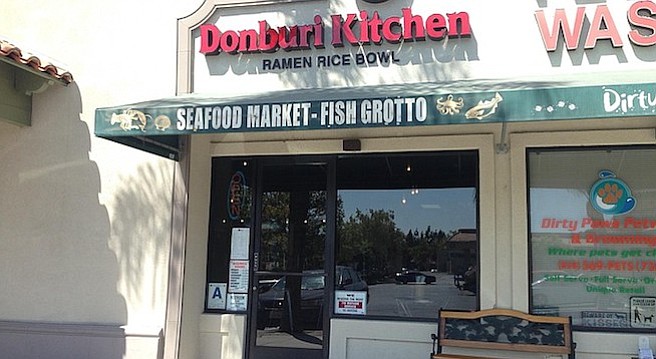 Heart set on donburi. Is there something besides ramen or sushi?

Donburi is all about the bowl. The word basically means a bowlful of rice, and usually connotes a dish topped with some kind of protein. It's not anything fancy, but there are dozens of donburi possibilities, so a shop dedicated to the concept got me wondering how it would be possible to choose. Would I order my favorite, a fried pork cutlet? Maybe see what they do with beef? Or I could go for the oyakodon, a chicken and egg dish whose name translates to "parent and child."

However, when I checked out the menu, there was sign neither of katsudon, gyudon nor oyakodon. Meanwhile, a good portion of the menu was devoted to sushi, and most of the customers — including a few regulars — were there for the shop's most popular dish. Ramen.

Well, ramen's served in a bowl, anyway. I love the stuff, but not for lunch on a warm afternoon when my heart's set on donburi.

Unagi. Now we're getting somewhere. Unagi, the cooked river eel so common at sushi restaurants. This dish is also called unadon, and Wikipedia claims it was the original donburi, dating back 300 years. Had I known this at the time, I'd have ordered it for the historical connection. But I didn't.

Poke. With so many dedicated poke shops opening this year, it seemed unfair to judge a place based on the surprisingly easy to muck up dish.

Salmon. Raw salmon always sounds delicious, and this would have been my choice had a special not trumped it.

Chirashi. Basically, a combination of raw fish, chirashi, or "scattered" on top of the rice. This chirashi don turned out to have three slices of salmon, two slices of ahi tuna, and two slices of yellowtail — seven total for $13. These were thick slices, too, really more like chunks of fish. 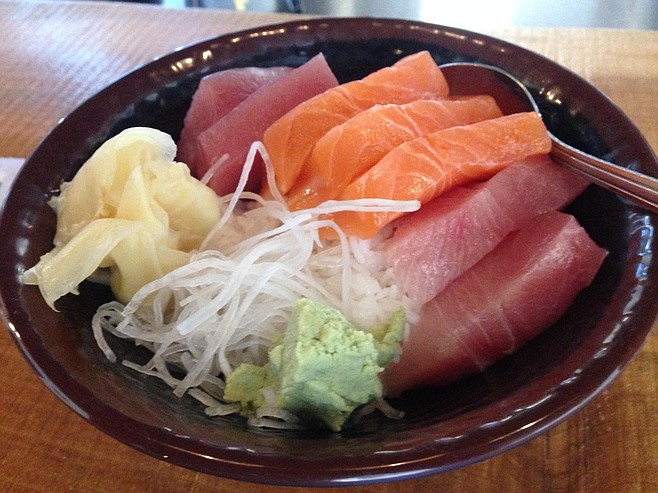 Thick slices of raw fish make the chirashi don special worth digging into — but best to ditch the spoon in favor of chopsticks.

Technically a special, they told me it's one of those specials a restaurant tends to offer every day. As a sashimi combo, it would go for $18 at most worthy sushi spots. The quality of this fish might not entirely measure up, but the salmon was very nice, and though the ahi didn't have as smooth a texture, it was actually more flavorful than a lot of the tuna I've tried recently.

It's not the lunch I expected, but one I enjoyed. Donburi staff told me more donburi dishes will be on the way as the young restaurant gets into its groove.