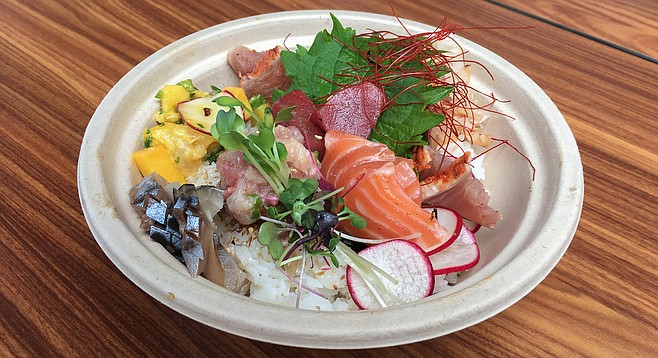 Choose donburi instead, at the new Little Italy Food Hall

After years of construction, Little Italy’s pedestrian-friendly Piazza Della Famiglia has opened, and the ten-thousand square foot, Euro-styled plaza has proven an ideal venue for the neighborhood’s Saturday farmers market. When I showed up on Wednesday, I found the piazza bustling while market stalls sold produce and — wait, Wednesday? 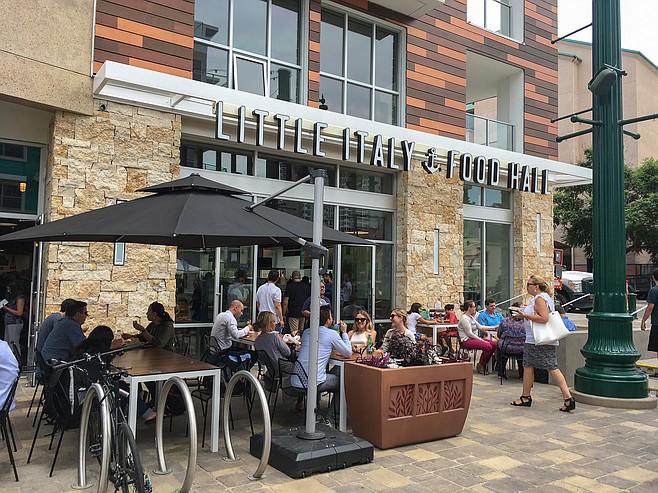 Yes, as of now there’s a more compact and exponentially less crowded farmers market in the same spot, Wednesdays from 9 am to 1 pm. Good to know.

But I bypassed it for lunch at Little Italy Food Hall, the food court that just opened on the northeast corner of the piazza, populated by six locally-owned food vendors and a full bar. Community tables sit inside the hall, and on the piazza outside.

Options range from pizza to tacos, but I went straight for the donburi counter, Single Fin Kitchen.

The word donburi means bowl, and in Japanese cuisine refers to a bowl of rice topped with assorted meat and vegetables. In the case of Single Fin, the rice bowls feature the likes of sashimi and ceviche.

I appreciate the use of donburi here. A lesser restaurant might have taken to calling these poke bowls. As poke restaurants have proliferated beyond reason, they have adulterated Hawaii’s traditional poke salad, and I fear American diners have been trained to identify poke as any pile of raw fish mixed with add-ins like avocado, sriracha, or flaming hot cheeto dust.

Single Fin’s donburi far surpass these dishes in concept and execution. With most rice bowls, my tendency would be to immediately stir up all the ingredients, so every bite could be a uniform mix of rice, veggie, and meat.

That's absolutely not how to approach these donburi.

Single Fin cofounder and chef Antonio Quindere hails from Brazil, but has rich experience in sushi and ceviche, including time working for famed sushi chef Nobu Matsuhisa. Whereas I have beef with poke bowls, he’s concerned that American sushi restaurants too often pile three or four different kinds of fish in a sushi roll, the attempt at largesse shrouding the same deliciously delicate flavors that make sushi worth the cost.

So each of Single Fin’s donburi invite diners to experience such flavors one a bite at a time. The $13 Salmon 360 bowl tops rice with discrete servings of salmon sashimi, belly, marinated roe, and tartare. The $14 Tuna 3 offers tuna three ways, and the three ways may change depending which cuts of fish are available any given day.

Then there’s the signature Single Fin bowl, which lets you try a little bit of everything for $16. This day, my bed of rice was topped by a patchwork of salmon, ahi tuna, seared albacore spiced with a carne asada rub, a sampling of the daily ceviche, hamachi tartare, mackerel, pickled eggplant, sesame encrusted seaweed, smoked bonita flakes, chili threads, daikon radish, and a shiso leaf, aromatic with mint- and basil-like flavors.

It’s the most beautiful dish I’ve ever been served in a disposable bowl. Every bite offered a different treat for the palate, creating a unique dining experience that could be read almost like a collection of love poems in ode to Japanese cuisine.