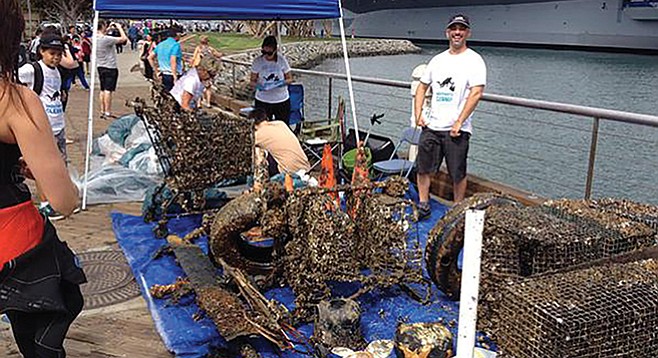 Clean up the bay with Power Scuba

My friend Joe and I used to have a running bet on the number of bass caught that morphed into who found and hauled the most trash from the water. Down between the riprap rocks and on the tide lines there was paper, glass, and plastics throughout the bay.

Joe was a certified diver and I remember a night when he and a friend, Jim, called me for some help while diving Mission Bay for Joe’s final dive for certification. Joe’s wetsuit had ripped and he didn’t want to go in but Jim, a dive master, said to call me to bring duct tape. When I got there, Jim had returned from a short dive in the channel outside the lifeguard station at Quivira Basin. He described the underwater scene; some big crabs, a few little lobsters and one halibut and some smelt, but he noted the debris; shopping carts, a tire on a rim, several old rusting traps, bottles and disintegrating cans, ropes, tangles of fishing line, netting, and more. Joe was taped up and ready, but they called off the dive. It was too depressing. Joe did his final cert dive in La Jolla Cove.

You can join a dive cleanup this Saturday, October 15, along the downtown waterfront among the vessels at the maritime museum. Diving is otherwise forbidden in San Diego Bay inside of Ballast Point.

Dive in the Bay

Power Scuba, in partnership with the Unified Port of San Diego, BAE Systems, and the Control Group, is hosting the event from 7:30 a.m. until noon and will be headquartered along the walkway in front of the Fish Market restaurant south of the U.S.S. Midway museum. You do not have to be a Power Scuba member to join in the cleanup effort, but divers must meet all requirements and have signed up by October 7.