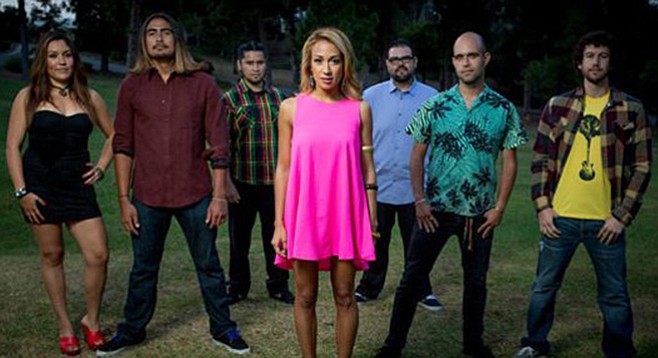 The so-called “San Diego sound” has at times been described (usually by non–San Diegans) as pop punk (Blink-182, Pierce the Veil ), Christian rock (P.O.D., Switchfoot, As I Lay Dying), screamo (Far, My American Heart), coffeehouse folk (Jason Mraz, Gregory Page, Jewel), or even novelty music (Mojo Nixon, Beat Farmers, Strawberry Alarm Clock). As of autumn 2016, however, San Diego could be ranked as the nation’s top reggae hotspot. Two local acts have topped Billboard’s Reggae Album chart in the past few weeks: Stick Figure, with their album Set in Stone, and Hirie, with their sophomore full-length Wandering Soul. Stick Figure was also on the cover of a recent Pollstar magazine, and the female-fronted Hirie debuted at number one on the iTunes reggae chart.

"Fire on the Horizon"

Of the 4500 performers with band pages in the Reader’s Local Music Database, 170 identify themselves as reggae/ska acts, with most of them currently extant. The best-known bands mix their music with other genres, such as the punk-inclined Slightly Stoopid and Buck-O-Nine, or pop-crossover acts like Big Mountain, which landed in the Billboard top 40 with their 1994 cover of Peter Frampton’s “Baby, I Love Your Way.”

Stick Figure is no stranger to the Billboard reggae charts, having hit number one in 2012 with their Burial Ground album. Set in Stone features guest appearances by Collie Buddz, Eric Rachmany of Rebelution, and members of Slightly Stoopid.

Several reggae shows are happening on local stages over the next few weeks, including I the Mighty at the Irenic (October 13), R.O.A.R. at De Oro Mine Company (October 14), Ziggy Marley at the Belly Up (October 24 and 25), Warrior King at Worldbeat Center (October 28), and John Brown’s Body at the Music Box (November 10), the Devastators at 710 Beach Club (October 29), Common Sense at the Belly Up (November 11), and Slightly Stoopid at the Observatory (November 12).