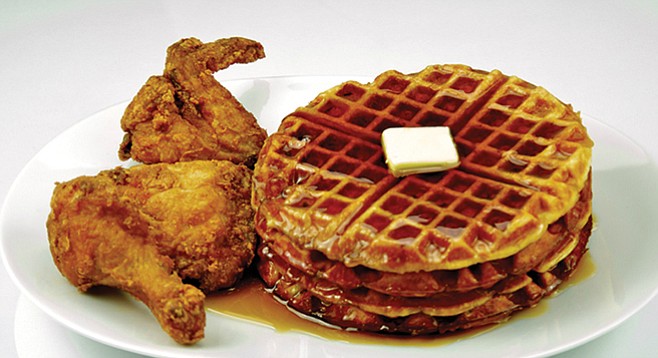 If only there was a Roscoe's in San Diego

Until then, try Long Beach or the frozen food aisle

Is it true that Roscoe’s is coming to San Diego? Give me the straight dope.

As of this writing, Roscoe’s has yet to publicly confirm the rumors.

I don’t know how I feel about this.

There was a time when, at least for me, every trip to L.A. County culminated in a visit to the Long Beach Roscoe’s. There, I would bask in the pink neon radiance and dine on the finest chicken and waffles the world has ever known. If Roscoe’s follows through on their promise to open a restaurant in San Diego, then that magical aura of far off LaLaLand greasy-chicken magic may dissolve like the unthinkable volumes of sugar Roscoe’s packs into their lemonade. I will be forced into having been into it before it was here. Cruel, cruel hipster fate.

In the meantime, did you know you could get frozen Roscoe’s waffles at the grocery store?

Funny you mention this spot.

I actually have a story about this in the works for our food section.