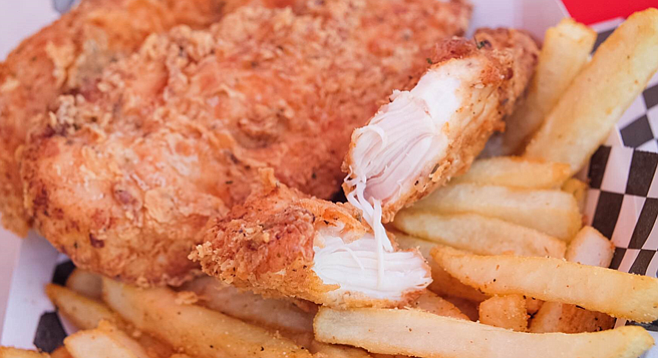 If you want to know about Da Chicken Coop, there is only one question that matters: How does it stack up against Roscoe’s? Aw, stop groaning. You have to ask. There is no other metric by which chicken and waffles can be judged. 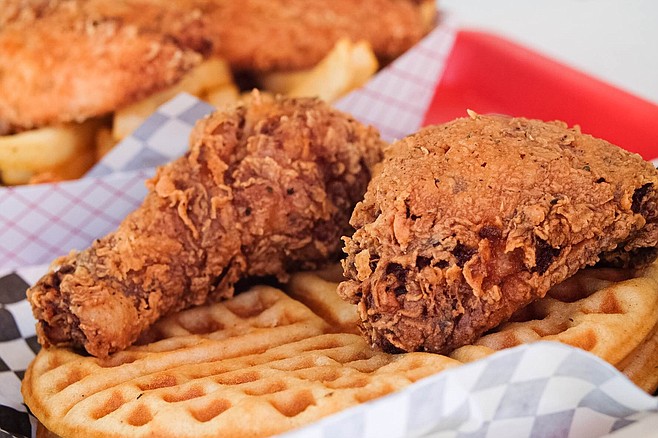 I’m happy to report that Da Chicken Coop holds its own. I dare say it’s just about as good, though I confess an eternal soft spot for the Long Beach Roscoe’s. Owner Brad Cooper, who also helms the smoker at Coop’s West Texas Barbecue, didn’t try to duplicate the Roscoe model. Instead he has his own take on the iconic dish, and it works. 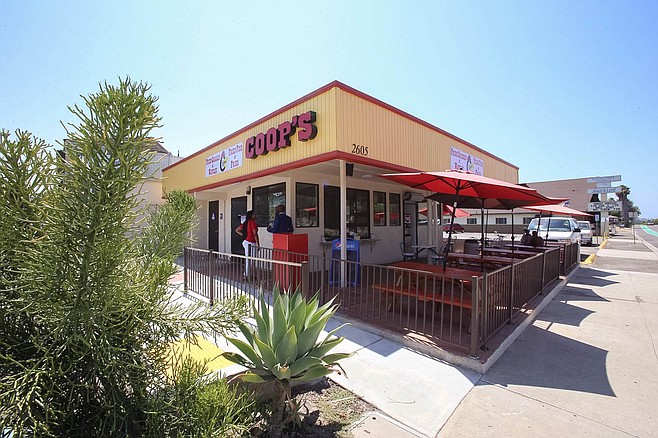 Anyone familiar with Roscoe’s signature chicken might expect Da Chicken Coop to ape the light, golden, thin-skinned chicken style of the L.A. establishment, mostly because Roscoe’s chicken is damn fine. But Coop’s chicken boasts a thicker, crunchier breading that absorbs all the hot sauce you want to throw at it.

The waffles come out thicker and more cakelike than the soft waffles up north, but not to their detriment. More than up to the task of sopping up the industrial-grade syrup and errant drops of hot sauce, what they really want is a big pat of softened butter to take things over the top. 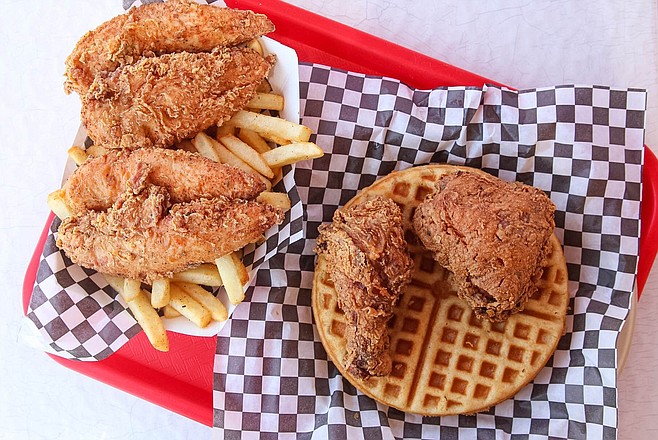 At this time of year, the patio (there is no indoor seating) sits in shade during the early part of the day, and it’s only about a 15-minute drive from Normal Heights to Lemon Grove when there isn’t traffic. Besides the fact that you have to set aside the rest of the day for digestion after a trip to Da Chicken Coop, I see nothing standing between it and San Diego chicken-and-waffles domination.

My only problem with Coop's restaurants is the impossible choice faced in that parking lot — go left for ribs, go right for fried chicken? Both so good it tears at my humanity!

And if you eat too much, you can go right to church on the OTHER side of the lot and pray your gluttony away ;)

I cannot say enough good things about the food and the employees at both restaurants. We are huge fans of both places. The food is fantastic- I will never make fried chicken again after having their version. It is just the best we have ever had. The employees at both establishments are so friendly, polite and accommodating! We love going there. Great food and great service- a combination hard to find today. Mr. Cooper- thank you for the joy you, your family and employees bring to our lives every time we visit.

I love Coop's Have bought take out and a couple of large catering orders from them. The food is outstanding and the employees are so friendly. Great local family owned business.

On a side note, Roscoe's House of Chicken and Waffles is coming to Barrio Logan. It is rumored to be opening this fall (2016).

I've heard the rumors, and I'll believe it when I see it!

Reportedly, it will be located at 1678 National Avenue.

Yup. Reports are one thing though, and an actual build is another! Opening a restaurant is a permit-infested, crooked pain in the ass, and I wouldn't be surpised to see the Roscoe's brass pull the plug on their effort if the city makes it impossible to open in less than two years.