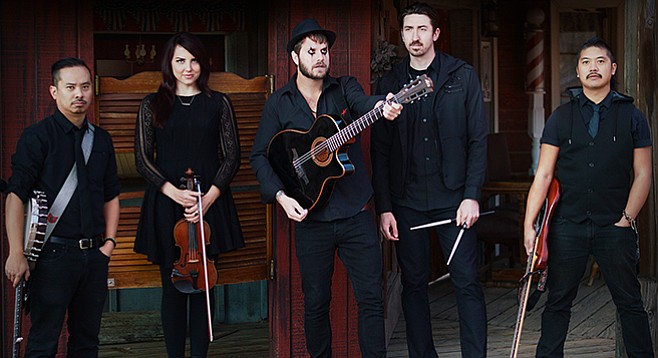 San Diego's first Gypsyfest to be held at a nudist resort

The cofounder of Quel Bordel, San Diego’s “world punk” band, first discovered the site for their upcoming music festival when they were scouting for a site for band photos.

“We were looking for abandoned train cars,” says Quel Bordel’s singer/guitarist Jakovich Skolnick. They found the rusting coaches in the backcountry near Jacumba off of Highway 8.

“When we were brainstorming for a location for Gypsyfest, we remember coming across a nudist resort that was right near where we did the shoot. We went down there to check it out with the owners. It’s this huge, beautiful property with a ton of amenities. There are bathrooms, a pool, a restaurant, a bar, and a motel with ten rooms.”

Skolnick was wowed. “They even have stages already built.”

The upshot is Gypsyfest, which will be held Saturday, August 6, at the De Anza Springs Resort. Four stages will host 35 bands. Food, vendors, street performers, and body painters are part of the package.

Skolnick says the whole idea is a thank-you gesture to their sister gypsy band, Bandapart from France.

“They had us to tour with them in Europe last summer. This is our way of paying them back. The theme of the festival is gypsy music.”

But Skolnick says not all the Gypsyfest artists have the same DNA as Quel Bordel and Bandapart. “This festival is heavily skewed toward folk.”

Skolnick says his Jacumba festival is not the first Gypsyfest.

“There is one in Spain, Romania, and New York. They are all independent. I contacted every one of them, and they basically gave me the right to use the name. The New York promoter told me, ‘I’ll even do you one better.’ He told me if this festival goes well, we could start a network of Gypsyfests around the country.”

But how will the De Anza Springs regulars interact with the clothed Gypsyfesters?

“You may see a naked person or two on the way in. There are some nudists who live on the premises. But they won’t be near the stages.”

Skolnick says that while there are more expensive packages available, the basic $25 entry fee allows you to camp overnight.

“There are two separate entrances.” Skolnick says there will be some barricades but admits the entire resort cannot be secured. “I imagine if some people want to hike miles to get in they could.... We’re expecting around a thousand the first year.”