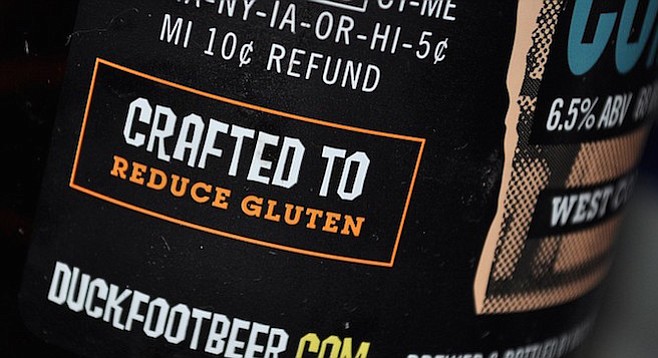 An IPA for intolerant drinkers

Duck Foot Brewing celebrated its first year in business in June, roughly the same time its first bottle release hit the shelves. That means gluten-intolerant drinkers got three more beers to add to their limited craft options: a porter, a blonde, and an IPA. Better yet, a West Coast IPA.

Duck Foot is one of several breweries using a White Labs product called clarity ferm to break down the glutens in its beer. Duck Foot uses clarity ferm in all of its beers. So does its Miramar neighbor, Amplified Ale Works. Culture Brewing and Automatic Brewing do so selectively, indicating "gluten reduced" beers with a GR tag. 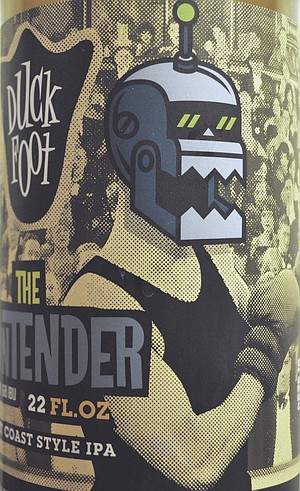 The FDA won't allow a "gluten free" label on any beer brewed from glutinous grains such as barley and wheat, even if the finished product falls under its maximum threshold of 20 parts per million. White Labs tested Duck Foot's beers below 10 parts per million. Amplified beers have tested below 8. But it doesn't matter — unless a beer is brewed with non-glutinous grains such as rice or sorghum, it can only claim the designation, "Crafted to reduce gluten."

White Labs analytical lab manager Kara Taylor explains that clarity ferm was originally designed to reduce an effect called chill haze. That's basically a clouding of beer that occurs in cold temperatures when proteins clump together into particles large enough to be visible.

In basic terms, the enzyme breaks these hazy proteins apart. Since glutens are proteins, they're broken up too. "It's basically chopping them into smaller amino acids," Taylor says, "cleaving that gluten so tiny that it's not causing a reaction." She stresses that while qualifying lab tested beers may generally be trusted by the gluten intolerant, its always a good idea to drink the first one slowly, as individual sensitivities vary.

The Contender is dry hopped with Simcoe, decidedly hop forward with a subdued caramel malt. The orange hued pale gives off grapefruit aromas and delivers citrus notes built around piney bitterness, though at 68 IBU it's far from a bitter bomb. I initially found it bone dry, but as it warmed the edge softened, and malts came forward a bit. Even so, at 6.5% ABV the thin, crisp IPA closer resembled a session ale rather than a bold west coaster.

The Contender ain't the champ in this IPA rich town — there are too many hoppy heavyweights in line for that distinction. But it's clean, aromatic, and drinkable. And drinkable is arguably its most important quality for the gluten intolerant, who have plenty of reason to welcome the appearance of this bomber at local liquor stores.

While this new beer claims to be "reduced" in noxious gluten, I just read the words "gluten-free" on the label of an expensive bottle of shampoo sold in a cool expensive hair salon. I guess it is for the hair of that miniscule number of rich and cool people with celiac disease. (If ever there were a scam bought hook line and sinker by the American people without a peep of nanny-state interference, the "gluten-free" marketing craze is it.)

I agree there is a craze that easily impressionable people have whimsically glommed onto, but there are plenty of people with legit problems digesting gluten who have to be really careful about what they eat or drink. I know several, including beer fans who have been forced to give up a great pleasure in life. Hopefully, they will enjoy this beer.