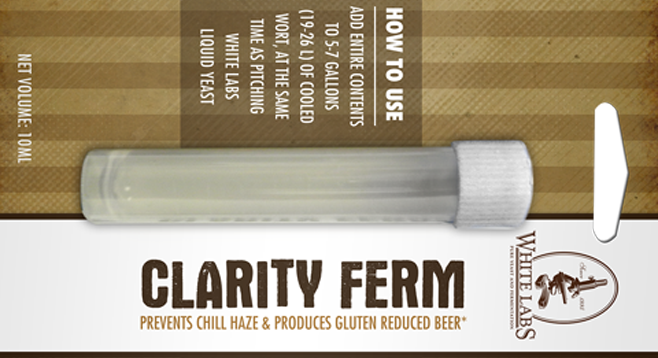 The words Clarity-Ferm won’t mean much to the average beer drinker, but the impact of that product, which was introduced in 2013 by local yeast-production company White Labs, is likely to be so huge that it will someday be a household (or at least brewing industry-wide) name. Last year, I wrote about local craft brewing companies Duck Foot Brewing and Amplified Ale Works using Clarity-Ferm to keep the amount of gluten in their beers so low the finished products nearly qualify as being gluten-free. While not 100% rid of gluten, those beers do not incite the violent reactions that keep gluten-intolerant individuals from consuming beer. This is a big deal.

Speaking as someone who was diagnosed as potentially being gluten-intolerant, I remember the immense disappointment that accompanied my doctor’s bad news. No more beer? I couldn’t fathom life without it. Fortunately, that diagnosis was off-base, but it opened my eyes to the plight of others. As such, the introduction of nearly gluten-free beer that suffers zero degradation of flavor — the beers I have sampled taste exactly the same as their base models — is something I am very happy to report.

Since my initial pieces about Clarity-Ferm, other breweries have begun experimenting with the product, most of them off the record. However, I recently learned that both Culture Brewing Company and Alpine Beer Co. have been brewing some of their beers using Clarity-Ferm. This makes Alpine the largest local operation yet to adopt this new ingredient, and their experimentation began around the time of last year’s San Diego Beer Week. Alpine’s brewers have been impressed with the results. So, too, have the companies who are not yet ready to go public with their use of Clarity-Ferm, signaling good news for many people who have heretofore been woefully unable to enjoy craft beer.

I am a homebrewer, but I don't have gluten issues. However, a good friend of mine is very gluten intolerant. Together, we have brewed three batches of homebrew using this product. We meticulously tested the beers using gluten strips, and each time the beers came out nearly gluten-free. My friend had zero issues to date. It's pretty darn amazing, especially for someone like him who loves craft beer, but has been stuck with nasty Sorghum beers or wine.