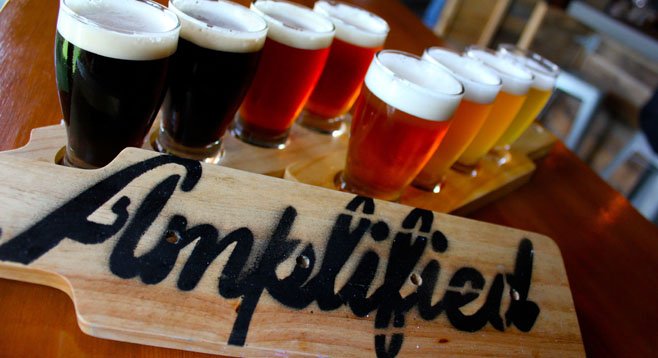 OK, now that you’re paying attention, I’ll admit to crafting a title geared to garner a click or two. What I’m actually talking about is beer that is almost gluten-free. Yes, again.

Two weeks ago, I wrote about an upcoming brewery, Duck Foot Brewing. The owner of that company is gluten intolerant and, since he wants to be able to drink as much of his product as his clientele, he will be making beers devoid of gluten. Were he able to process the stuff, his beers would be just like everybody else’s, so gluten-free isn’t his mission—quality beer is. 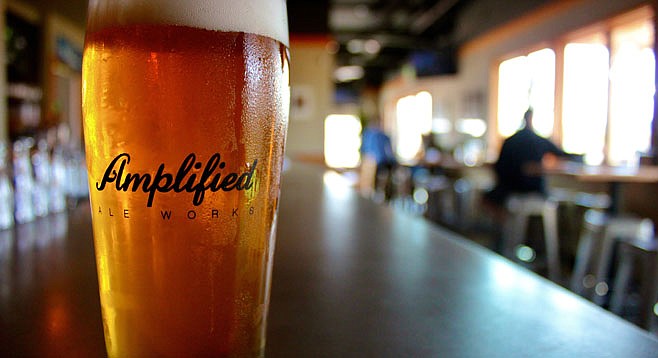 Quality beer is also what Amplified Ale Works (4150 Mission Boulevard, Pacific Beach) is all about. Since hitting the suds scene a little over a year ago, owner JC Hill and brewmaster Cy Henley (who also works as a brewer at Mira Mesa’s Saint Archer Brewery) have produced a great deal of it. Now, they’re turning their attention to eliminating as much gluten as possible.

The inspiration for this new mission is Garrett Reed, the manager of California Kebab, the business that houses Amplified Ale Works. Reed has celiac disease, so consuming the house beers (or just about any beer) produces painful consequences. Hill, Henley, and Reed teamed together to find a solution. The answer came in the form of Clarity-Ferm, the product of local yeast production company White Labs.

According to the team at Amplified Ale Works, when added to wort (unfermented beer) at the beginning of the fermentation process, the Clarity-Ferm (which was developed to remove chill haze) enzyme attaches to and breaks down gluten molecules into tiny pieces that pass through the human body without inciting violent reactions among intolerant consumers.

From here on out, Amplified Ale Works will add Clarify-Ferm to all of its brews. The beers aren’t technically “gluten-free,” but have a far lower amount of gluten to the point where even drinkers with celiac can consume a few without consequence.