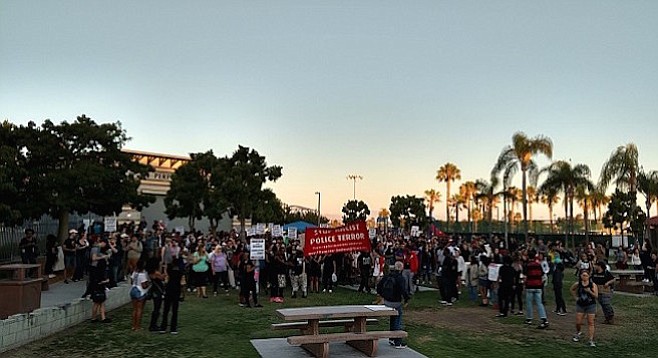 "Black Lives Matter is under attack"

Hundreds of protesters representing a coalition of groups sympathetic to the Black Lives Matter movement rallied in City Heights on Friday night (July 15) before embarking on a march through the neighborhood that resulted in southbound lanes of I-15 being temporarily closed to traffic.

"Black Lives Matter is under attack," said activist Gloria Verdieu, referring to criticisms of the group both in the wake of last week's killings of Dallas police and backlash from detractors instead promoting an "all lives matter" mantra.

"When black lives matter, all lives do matter," Verdieu said. She urged the groups in attendance — representing causes including police brutality, socialist politics, LBGTQ rights, and others — to continue efforts to organize locally and nationally, to push for solutions like a stronger local police-review board. 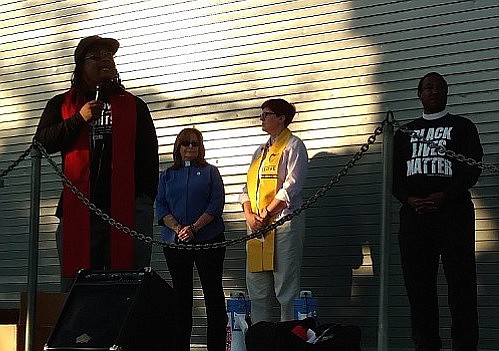 "I don't know if I should feel excited because I'm seeing all of these beautiful, diverse faces, if I'm encouraged by the fact that you're here today holding signs and lighting candles," questioned Rev. J. Lee Hill at the group's rally. "Yet standing here today, I'm mad as hell. The truth of the matter is that if I go out and express the rage and anger I'm feeling, I might end up the next one dead."

Following nearly two hours of speeches, the group, numbering in excess of 700, marched up Fairmount Avenue with a police escort, heading toward the I-15 overpass at El Cajon Boulevard, where they intended to display lighted signs against police violence. Met by a heavy contingent of law enforcement guarding the bridge, the group circled around for some time until a contingent broke off and began marching down an exit ramp and onto the freeway.

While others cheered from above, police worked to corral the protesters who'd spilled onto the freeway, opening lanes of traffic after about 20 minutes. Officers continued to drive the remaining group back toward the park from which the rally originated, across the street from the Mid-City police station, where they unsuccessfully demanded an audience with chief Shelley Zimmerman.

Despite the freeway incident, the rally and march remained largely peaceful, and police were not immediately reporting arrests.

"It was peaceful the whole way through. I didn't see any violence at all," said march participant Michelle (who declined to give her last name). "A lot of people driving when we were walking through the streets were honking their horns and holding their fists up in solidarity with us who were marching."

Sad that police have to come out and supervise demonstrators after all that's happened last week.

A dying movement gasping for air.

Remember Reginald Denny. I am NOT stopping.

Now that goes back away.

This movement seems to have inspired a cop killing spree. This will not solve any of the problems and only make matters worse, for all. If the cop killings continue, we may find out nation under Marshall law.

Ponzi - maybe it's safer for the innocents that there's no more reactionary "freedom" for some time as to consider the consequences of provocations by radicals of all kinds, such a fearful time in our history, Protest accomplishes additional pain and fear of citizens and blue. Any body know how to write about their feelings?

Protesting is one thing--marching, chanting, candle light vigils. It's all good, regardless of the cause. Closing down freeways, endangering lives, preventing emergency vehicles like fire trucks and ambulances, preventing the safe flow of traffic is criminal and must be dealt with by imposing criminal penalties, instead of locking some people up for a few hours, and then letting them go. Bad police should be held accountable, and should be punished. But there is a more constructive way to get these things done. And by the way, All Lives Matter. If anyone thinks that statement is divisive, then get some therapy.